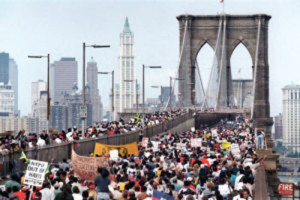 FIGHTING STIGMA, AND OTHER THINGS MY ANCESTORS TAUGHT ME

On Dec. 22, 2017, a report surfaced in The New York Times that President Donald Trump had allegedly made inflammatory remarks regarding immigrants. According to the report, as he reviewed the visas issued to immigrants in the last year, he claimed that Nigerians coming to America “would never return to their huts” and that Haitians “all have AIDS.” I was in my mother’s house in Flatbush, in Brooklyn, N.Y., when I heard the reports. Flatbush is a working-class Caribbean neighborhood, and amid the Christmas preparations, the community reverberated with memories of previous stigma and discrimination.

In the late 1980s and early ’90s, Haitian immigrants were discriminated against in both overt and subtle ways. The Centers for Disease Control and Prevention listed four groups as being at high risk for contracting HIV, colloquially referred to as the “4H’s”: hemophiliacs, heroin users, homosexuals and Haitians. This list had ramifications in every aspect of life.

The author Edwidge Danticat, responding to Trump’s comments in The New Yorker, told of her English-as-a-second-language class being excluded from a trip to the Statue of Liberty when parents of other children voiced concerns that these recent immigrants would expose their children to HIV. One of my aunts was quarantined after she returned from a trip abroad. Although she had been living in the United States for years, she still carried a Haitian passport, so the hospital staff assumed that she had HIV when she presented with what was, in fact, malaria. Harmful policies continued long after science would suggest that we knew better; immigrants living with HIV were not admitted into the U.S. until 2009.

Of course, Trump’s alleged statements also stigmatized people living with HIV/AIDS (PLWHA), by insinuating that they would be unworthy candidates for immigration to the U.S. Similar to Haitian immigrants, PLWHA have also been disenfranchised by a history of stigma. HIV criminalization laws exist in 23 states. This administration has not set an HIV agenda and actually disbanded the President’s Advisory Council on HIV/AIDS right before the new year.

The attacks on health care showed disregard for the health of PLWHA, especially people of color and low-income people. My aunt once noted that “even when you change the list, stigma returns and it can flare up at any time.” Stigma feeds on itself and manifests in dehumanization and the creation of callous policies. In November, right before Thanksgiving, the end of Temporary Protected Status for Haitians was announced, leaving 60,000 people unsure of their future within the United States.

HIV advocates know that at certain points, communities must mobilize not only against policies but also against ignorance and hate, which threaten their very humanity.  In 1990, Haitian Americans and their allies marched across the Brooklyn Bridge to protest a ban on blood donations from Haitian Americans. Growing up, I heard stories about the palpable feeling of community rage and power on that day. In retrospect, these stories taught me that harmful rhetoric begets harmful policies, but also that communities have the power to fight back.

The beginning of a new year often brings reflection and preparation. Jan. 1 is Haitian Independence Day, and we tend to spend a lot of time thinking about our ancestors. Similarly, HIV work, through its daily advocacy, honors those who were lost,. The lessons we must carry forward are clear: We cannot afford to risk dehumanizing one another as we fight dangerous policies. When we are defending our fundamental rights, we cannot splinter. Not only must we be unified in our resistance, but we must proactively shape the future we want. A future that does not vilify immigrants—or dehumanize them based on their perceived “worth” to the U.S.—also does not vilify PLWHA. When the next stigmatizing comments or policies come, we must meet them with a resounding unified resistance and counter them with a vision for a better tomorrow.

Marie-Fatima Hyacinthe is a mobilization coordinator for the Black AIDS Institute.

Children in cages create glimmers of the moral reserve

Children in cages create glimmers of the moral reserve […]

During an on the record meeting with publishers of Black-owned newspapers on Capitol Hill, Rep. Al Green (D-Texas) discussed a range of issues from symbols of the Confederacy to advertising in the Black Press and the impeachment of President Donald Trump […]