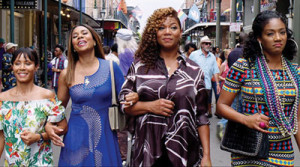 This hilarious and relentlessly bawdy take on a girls’ weekend reunion in New Orleans is following in the footsteps of some very popular female-appeal movies like Sex In the City and Bridesmaids. But Girls Trip is not a copycat. It’s very unique and will leave its own lasting imprint on the good-girls-gone-wild genre.

Ten minutes into this comedy, you’re asking yourself, “Who the hell wrote this?” The story is contemporary, the dialogue is laugh-out-loud funny, the characters are distinct and their life dramas, rivalries and relationship problems are thoroughly engaging for 122 minutes.

Blame the naughty humor on Kenya Barris (TV’s Blackish) and Tracy Oliver (Barbershop). They completely understand the lurid minds of ladies who’ve had one-too-many cocktails and speak their mind. And for audience members who do not have a potty mouth, but wish they did, this crew says every wicked thing you ever thought, but never had the nerve to say.

Ryan Pierce (Regina Hall, When the Bough Breaks) is a successful and envied author, somewhat like an Oprah without a TV show. She’s married to ex-NFL player Stewart (Mike Colter, Luke Cage). On the surface, they have an ideal marriage and are on the verge of getting their own talk show. Behind closed doors, they’ve got problems. However, they must protect their brand and are determined to keep up their facade.

Ryan talks her old college girlfriends, who used to call themselves the “Flossy Posse,” into a reunion in New Orleans at the annual Essence Music Festival. There’s Dina (Tiffany Haddish, The Carmichael Show), the brassy one who talks like a drunk hooker, “We gonna get some d—k this weekend.” Lisa (Jada Pinkett Smith), a nurse with two kids, is the prudish one: “Dina! I need you to use your lady mouth.” Sasha (Queen Latifah) is a gossip columnist, who is having trouble paying her bills.

The foursome gathers at the airport, checks into a lavish hotel and in short order they are kicked out thanks to Dina’s outlandish behavior. Apparently the finer establishments don’t take kindly to women who threaten patrons with bro-ken champagne bottles. The group moves to a fleabag motel that’s frequented by five-dollar prostitutes.

That’s the set up, and director Malcolm Lee (The Best Man), who has become the populist voice for the Black middle-class, works his magic. Scenes melt into each other with a quick rhythm, and each has its own dynamic, builds to a crescendo and leaves plenty of room for the cast to engage in comical banter. He gives the actresses room to play their characters to the max. Bedroom scenes, dance-offs, bar fights, Beale Street parades, testy confrontations, shocking revelations and raunchy repartee are orchestrated with precision. You barely have time to breathe between the outrageous scenes (editor Paul Millspaugh, The Best Man Holiday).

The cast works well together as an ensemble. Pinkett Smith finds the humor in her dour character, who is in desperate need of a wild night out. When she hooks up with a lanky 21-year-old (Kofi Siriboe, Queen Sugar), she gets her mojo back. Hall, as the lead character, has the right mix of shocking indignation and resignation. Latifah adds texture to the financially challenged Sasha. Larenz Tate plays an old friend named Julian, who is a sensitive soul and a perfect counterbalance to Stewart, a hardened lothario. Tate hasn’t aged a day since 1997’s Love Jones.

Haddish gets the best lines and the most outrageous physical humor. What she does with a banana and a grapefruit in one scene is so whacked out she could earn a best supporting actress award. She lifts the Dina character off the page, brings her alive on screen and displays a go-for-the-jugular humor that makes you think she will do anything for a laugh, just like Melissa McCarthy.

The quartet of actresses must share top-billing with New Orleans and the Essence Music Festival. Through the lens of cinematographer Greg Gardiner (The Best Man Holiday) NOLA and Beale Street look so inviting. The colors, especially in the costumes (Danielle Hollowell, The Best Man Holiday), pop off the screen with brilliant yellows, lush reds and bright oranges. Also, if you’ve been curious about the Essence Music Festival and have never gone, you’re getting a free look. Glimpses of concert performances by Maxwell, Faith Evans and others enliven the footage. Cameos by Morris Chestnut and Ava DuVernay add verve.

There is something endearing about watching old friends work through their differences and rekindle the love and solidarity that once united them. But that’s like reading Playboy for the great articles. Audiences who venture out to see Girls Trip are really hungering for outlandish humor and a good date movie—and that’s what they’ll get. They will laugh themselves silly and leave happy.

Every two seconds you’ll find yourself saying, “I can’t believe they just said that.”  But they did—and it was oh-so funny!

The cost of not doing business

The cost of not doing business
[…]

Youth not wasted on Shannon Williams

Those who say youth is wasted on the young obviously have not met Shannon Williams, president of the Indianapolis Recorder. At 37, she is one of the youngest newspaper publishers in the nation. […]