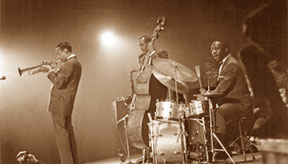 Film Review: I called him Morgan

http://bisnisbajumu.com/tag/gamis-bergo-krep Bee Bop. Jazz. The 1950s and 1960s were a hotbed for cool music, and the hip musicians, who played those genres on records and in smoky, dimly lit nightclubs, were a special breed. Years later, most people still revere legendary trumpeters like Miles Davis and Chet Baker and are amazed by the lives they led. Time to add another artist of note to that list of iconic instrumentalists. His name is Lee Morgan. His life was as colorful and tragic; his talent as deep. This enlightening and haunting documentary gives him his due.

Cheap Xanax Uk Credit Swedish musical documentarian Kasper Collin for reassembling the sordid pieces of Edward Lee Morgan’s’ life. Collin has had some practice. He also documented the career of American avantgarde jazz saxophonist Albert Ayler in My Name Is Albert Ayler, in 2006. He continues his tributes to lesser-known jazz artists with this absolutely spellbinding non-fiction film that plays out like a torrid novel. It tells the story of an ambitious young man, who was shepherded by the greats, fought the demons of drug addiction but was finally undone by a paramour. The story is so primal and tortured it also deserves to be a feature film starring someone like Michael B. Jordan or Nate Parker. Someone with depth.

http://dynamotaxi.com/?x=Steroids-Xanax-Buy Lee Morgan, born in Philly and a gifted trumpeter as a young adolescent, joined the Dizzy Gillespie Big Band at age 18 in the early ‘50s. Stints or guest performances with John Coltrane and Art Blakey’s Jazz Messengers further solidified his reputation in the jazz community for blowing a sweet horn. Recording around 25 records, mostly for the famed Blue Note Records label, added sheen to his career and allure. But as a musician’s life can go, he had his troubles. An addiction to drugs got him kicked out of Blakey’s band. He was broke, homeless and often sold his worldly possessions for a fix Heroin.

http://audiodescription.co.uk/directory/describers/north-east/site-specific-performance/promenade-performance/script-translation-services/museum-audio-described-guides The stabilizing force in Morgan’s increasingly harrowing life was a magnanimous older woman named Helen. She fed him, put a roof over his head, was his ardent lover, and his biggest fan. If Morgan regained his footing at all, it was because of her unwavering support. She loved him with all her heart, but not unconditionally. She had her pride. When Morgan turned his attention to a younger lover, his common-law-wife was not about to take it on the chin. She had a plan—and a gun.

Reconstructing Lee Morgan’s bio through old interviews with Morgan, anecdotes from jazz greats like Wayne Shorter, photos and archival footage vividly recreates the jazz age and the trumpeter’s travails. The most soul-crushing recollections, however, come from Helen herself. Her stories can be heard on an audio cassette interview that was arranged by a night school teacher who was intrigued to find out that one of his students did a stint in prison for committing perhaps one of the most heinous acts of violence in the jazz world.

http://grosirrumahan.com/konveksi-celana-jeans-kitty-panjang-murah-44ribuan.html Hearing Helen recall the ups and downs of her relationship that left her in an emotional fog is like hearing an old jazz 78rpm record that is so scratched you can barely make out the tune, but you do.  Everything you hear and see leads up to an ill-fated, cold wintry New York City night in 1972. Performers and an audience are gathered at an East Village jazz bar. Morgan is there with a girl on his arm. A shot rings out. An irrevocable crime of passion occurs. Time stands still. People live or die with the consequences.

Buy Pakistani Xanax Kasper Collin has assembled a top-notch tech crew for this urban tale. The splendid cinematography of Bradford Young (Arrival, Selma) recreates scenes with the artistry of a painter. Editing by Collins with the help of Hanna Lejonqvist, Eva Hillström and Dino Jonsäter make you feel like a picture book has come alive, reeling out photos with a rhythm as precise yet eclectic as a jazz score.

http://naturesown.co.za/product/corydalis-100ml/?add-to-cart=24036 Watch “I Called Him Morgan,” and you will sit enraptured. Morgan’s music and Helen’s foggy memories will take your breath away.

http://grosirrumahan.com/tag/grosir-daster-cantik It’s an amazing coda to a jazz musician’s life. It’s the encore Morgan never had the chance to do.

Buy Alprazolam India     “I grew up at a predominately Caucasian school and there was only five percent minority, and I felt out of place so much because of the color of my skin,” Franklin said. “But growing up, I found my love of arts, and through music that helped me to feel positive about myself and about who I was. […]

Ordering Xanax Online Illegal      The reality in many of these universities is that by the time you subtract preferences for minorities, the spots reserved for athletes, the preferences given to the children of donors, the places taken by children of the well-connected, college admissions is a process where the only people seemingly ‘guaranteed’ a spot, are people who have the system rigged in their favor. It’s clear, from reading some of the emails, that many of these parents were trying to ‘rig’ a guaranteed spot for their kid.  […]