– Thomas A. Moorehead has made automotive history. He’s the first African-American to own an ultra luxury Rolls-Royce dealership in America.

He’s starting his second month as the owner of Rolls-Royce Motor Cars of Sterling, a community in Loudoun County in Northern Virginia. He is one of only 35 Rolls-Royce dealers nationwide.

“This is a very good market,” Moorehead said. “This is the richest market in America, and we’ve done very well. We cover Maryland, Virginia,Pennsylvania, Delaware and the Districtof Columbia.”

A Rolls-Royce sells for anywhere from $250,000 to $550,000, depending on the model and the features. He said he expects to sell four to six new Rolls-Royces each month and six to eight used units.The 69-year-old trailblazer also made history in 2001 when he opened a dua ldealership in Sterling selling BMWs and Mini Coopers. His dealership is the largest minority owned BMW dealership nationwide and ranks among the top 10 percent in sales of the brand.

“When you look at it, Rolls-Royce is the next step up from BMW,” said Moorehead, who also is chairman of the National Association of Minority Automobile Dealers. The first Rolls-Royce he sold was a two-door Wraith coupe for about $330,000. His dealership has sold five since he opened his doors in December.

“We’re looking forward to having a pretty good year,” Moorehead predicted. “For individuals that have been sitting on the sideline due to the down economy, we’re starting to see those individuals come back into the marketplace.”

His success as a dealership owner has earned him the respect of elected officials. He was appointed by then-Gov. Mark R. Warner to serve on theVirginia Automobile Dealer Board in 2005. He served two terms. Prior to becoming a dealer, he was an analyst at Mobile and Chrysler corporations and director of community services at the University of Michigan. Looking for a new challenge, he decided to go into business for him-self.

And he picked automotive sales to make his mark. In 1988, with encouragement from another dealer, he made his start by purchasing Sentry Buick and Isuzu in Omaha, Neb. He owned that for nine years. In 1995, he opened Moorehead Buick-GMC in Decatur, Ill. He owned that for four years before jumping to Northern Virginia with his BMW and Mini Cooper dealership.Besides his success in running car dealerships, he’s also entered the hotel business.

In 2006, he bought the Marriott Residence Inn in National Harbor, Md. Since then, he has bought eight hotels nationwide. Moorehead’s background: He was born in Monroe, La. He earned a bachelor’s degree in business administration from Grambling State University in 1966. He earned a master’s degree in social work from the University of Michigan in 1977. He’s now working on his doctorate from the University of Michigan. He also belongs to the Baltimore Chapter of the National Guardsmen Inc., the Northern Virginia Chapter of Sigma Pi Phi and Kappa Alpha Psi fraternities. He’s also a 33rd degree Mason. 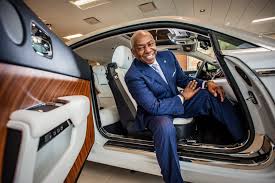 I hope all is well with you.   I would love to gauge your interest regarding four African-American mothers that raised over $8,000 for their children’s school through the Box Tops for Education program.   […]

Seventy-one years before Rosa Parks refused to give up her seat on a Montgomery bus, Ida B. Wells bought a first-class ticket for the ladies’ compartment on the Chesapeake & Ohio Railroad. When the conductor […]