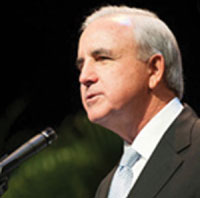 The suit claims that Miami-Dade County improperly held an 18-year-old in a county jail under the mayor’s controversial immigration order.

MIAMI, FL — A lawsuit was filed against Mayor Carlos Gimenez and Miami-Dade County on Wednesday claiming that officials violated the rights of an 18-year-old man by improperly holding him in a county jail under the mayor’s controversial immigration detainer order.

The suit claims that Garland Creedle was a U.S. citizen at the time he was detained. Gimenez did not immediately comment on the lawsuit.

The suit was filed in federal court by the American Civil Liberties Union (ACLU) of Florida, the University of Miami School of Law’s Immigration Clinic and the law firm of Kurzban, Kurzban, Weinger, Tetzeli & Pratt, P.A. The lawsuit seeks to have Gimenez’ Jan. 26 order with respect to immigration detainers declared invalid and Creedle’s March 13 detention to be declared unconstitutional. The suit is also seeking unspecified compensatory damages.

A spokeswoman for Gimenez told Patch on Wednesday that the mayor is not commenting on the lawsuit.

“We warned the county about the dangers posed by the premature decision to cave in to the Trump administration’s anti-immigrant threats,” stated ACLU of Florida immigrants’ rights attorney Amien Kacou in announcing the lawsuit. “Miami-Dade County has long prided itself on being a place welcoming to immigrants, and should honor that legacy by joining other cities large and small across the country in refusing to serve as tools of overzealous immigration enforcement policy.”

The suit charges that Gimenez’ immigration detainer order violates constitutional provisions against unlawful seizures under the Fourth Amendment and the guarantee of due process under the Fourteenth Amendment. Florida law also prohibits jails from detaining people for civil immigration purposes, according to ACLU.

“Miami-Dade County has been detaining people in jail for federal immigration enforcement officials ever since President Trump threatened in January to cut off funding for cities deemed ‘sanctuary cities,’” ACLU officials said. “After the county commissioners voted in February to collaborate with immigration authorities, however, the Trump Administration clarified that only cities that violate federal law would be at risk of losing federal money. Although the county no longer faces loss of federal funding, the commission has not adopted a new policy on immigration detainers.”

Creedle, who was born in Honduras, was arrested over an alleged domestic violence incident for which charges were never filed. “Despite this, Creedle was held overnight to begin immigration proceedings against him under the county’s detention policy,” ACLU officials explained. “Although Creedle was entitled to be released immediately upon posting bond, Miami-Dade officials held him in jail based on the assertion that he is a ‘removable alien.’”

In May, U.S. Immigration and Customs Enforcement (ICE) officials announced that the agency had arrested more than 41,000 people who are either known or suspected of being in the country illegally since President Trump signed his controversial immigration enforcement orders. This reflected a 37.6 percent increase over the same period in 2016.