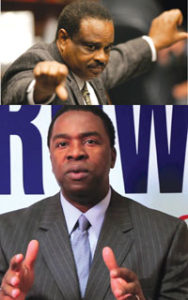 Florida congressman on defense over gun record in Democratic primary

Florida Rep. Al Lawson has found himself on defense over his gun record in his Democratic primary as opponent Alvin Brown has made firearms a central issue in the wake of last month’s mass shooting at Marjory Stoneman Douglas High School.

Brown, the former mayor of Jacksonville, has scoured Lawson’s record and criticized everything from his 2005 vote in the Florida Legislature for the controversial “Stand Your Ground” bill to accepting $2,500 in “blood money” from the National Rifle Association.

Lawson said the alleged NRA donation was a clerical mistake, in which his staff entered a code for the wrong organization. The donation no longer appears on the Federal Election Commission’s website. But the bitterness isn’t going away in what has quickly become the state’s most brutal Democratic congressional primary, which is unfolding in a minority-heavy seat that stretches across half of North Florida. The winner is all but certain to win in November because nearly 60 percent of the district‘s registered voters are Democrats.

“[Brown is] continuing to say that I’m a supporter of gun violence and so forth,” Lawson told POLITICO. “I served in the Florida legislature for 28 years and never got the support of the NRA.”

Lawson’s record on guns and Brown’s onslaught against him in Florida’s 5th Congressional District underscores just how toxic guns are as a political issue in Democratic politics, where guns weren’t viewed as such a net negative before the Feb. 14 high school shooting. For instance, in 2005, every Democrat in the Florida Senate — including Lawson — voted for Stand Your Ground, which passed the chamber unanimously.

Since the shooting death of Trayvon Martin in 2012, however, some Democrats rescinded their support for the law. Lawson is not one of them, Brown’s campaign notes. It also points out that Lawson voted in favor of a 2001 NRA-backed bill aimed at stopping “frivolous and reckless” civil actions against gun manufacturers.

But following his election to Congress in 2016, Lawson has voted with other Democrats on gun control. He voiced support for restrictions on assault weapons, and voted no on bills that would have required all states to recognize concealed carry permits issued in other states. He also voted against legislation that allowed some veterans deemed mentally incompetent to purchase firearms and ammunition unless declared a danger to themselves or others by a judge.

With Lawson’s congressional record so similar to other Democrats, Brown and his team are focusing more on Lawson’s past votes in the Florida Legislature, where he spent nearly three decades as a legislator. Brown’s campaign also launched a television advertisement in the Tallahassee market calling his opponent President Donald Trump’s “favorite Democrat.”

“Al Lawson has sided with the NRA for decades, supporting Stand Your Ground, protecting gun manufacturers and even requiring a gun in every home. These positions are simply out of step with voters of the 5th District and Americans across the country we see raising their voices in protest of gun violence,” Dave Beattie, a longtime adviser to Brown, said in a statement issued through the campaign. “We’re certainly going to communicate on this issue, because there is a stark contrast between Lawson’s record of expanding access to guns and Mayor Alvin Brown’s clear commitment to stemming the tide of gun violence.”

Asked if he still supports Stand Your Ground, Lawson spoke of the need to protect homeowners. He said his stance on the issue is painted by personal experience. In 1996, his wife was assaulted in a home invasion. He rejects the Brown campaign’s use of his 1993 statement that all households should be mandated to have a gun, as emblematic of his record.

“People say things and try to make issues out of them. I mean, run your race, you’ve been a mayor in a big city that got a lot of violence and you didn’t get reelected because maybe you didn’t do a very good job,” Lawson said. “Run on your record. I have a record, a long record that can be used, but not a statement.”

Brown’s aggressive campaign strategy is surprising to Lawson, he said, because he previously had an amicable relationship with the former mayor of Jacksonville. Brown even asked him to help raise money for his mayoral campaign, Lawson said.

“He used to call me and tell l me I was his hero, and that he wanted to be just like me in serving, and so I was quite surprised when he was going to run because he asked me for advice,” Lawson said of his competitor.

Currently, 29-year-old rookie Rontel Batie is the only other challenger who has entered the race. No Republican candidates have declared their candidacy. Florida voters will go to the polls for the primaries on Aug. 28.

Marc Caputo contributed to this report.