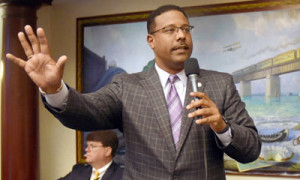 Florida lawmakers have started moving forward with a proposal to revamp rules for the payday-loan industry, allowing customers to borrow larger amounts of money over longer periods of time.

Florida lawmakers have started moving forward with a proposal to revamp rules for the payday-loan industry, allowing customers to borrow larger amounts of money over longer periods of time.

The House Insurance and Banking Subcommittee unanimously approved the changes Wednesday, a day after a Senate committee backed the Senate version. The proposal, in part, would allow a new type of “installment” loan that could reach $1,000 and be repaid over 60 to 90 days.

Supporters say the changes are needed, at least in part, because of federal regulations slated to take effect in 2019 on the types of smaller-dollar, shorter-term loans made by payday lenders in Florida, though a federal agency said last week it will reconsider the regulations. Consumer groups such as the AARP and Florida Legal Services, however, oppose the proposed legislation.

The House bill drew lengthy debate Wednesday, with lawmakers saying payday loans play an important role for many low-income people who might not have good credit and get hit with unexpected expenses.

“These products are necessary in some of our districts, and these products help people get from payday to payday,” Rep. Sean Shaw, a Democrat who said he represents the most economically depressed area of Tampa. “Yes, it’s not ideal. There are people whose budget requires this sort of product.”

But Alice Vickers, an attorney for the nonprofit Florida Alliance for Consumer Protection, described high-cost payday loans as a “debt trap” that people turn to when they want money fast, possibly without understanding the ultimate amounts they will repay.

“I think that people frequently go to payday loans because they can get the loans in 10 minutes, and the main problem with that is they don’t determine the ability to repay,” Vickers said.

Under current state law, borrowers can get payday loans up to $500 for periods of seven to 31 days, according to a House staff analysis. In repaying the loans, borrowers face charges up to 10 percent of the loan amounts and $5 “verification” fees. Generally, the transactions involve borrowers post-dating checks that the lenders hold for periods until they can be repaid.

The federal Consumer Financial Protection Bureau last year finalized regulations that include requiring payday lenders to determine the ability of borrowers to repay such short-term loans, the House analysis said. Those regulations are slated to take effect in August 2019.

The proposed state legislation, backed by payday lenders such as Amscot Financial Inc. and Advance America, would provide an avenue to make loans that would not fall under the regulations. The proposed “installment” loans would be required to have terms of 60 to 90 days, with maximum amounts of $1,000. Borrowers would pay fees up to 8 percent of the outstanding balances on a biweekly basis.

The future of the federal regulations became murky last week because the CFPB said it will begin a process to “reconsider” the regulations. The move came after Mick Mulvaney, the budget director for President Donald Trump, was named to lead the bureau. The bureau moved forward with the regulations under Richard Cordray, an appointee of former President Barack Obama.

The federal reconsideration drew only passing discussion during Wednesday’s House Insurance and Banking subcommittee meeting. As a sign of the stakes involved in the issue, Amscot has 11 registered legislative lobbyists, including former state lawmaker and Rep. Kendrick Meek.

The House bill is sponsored by Rep. James Grant, R-Tampa, and Minority Leader Janet Cruz, a Tampa Democrat who spoke about growing up with her divorced mother, who sometimes needed to go to businesses that offered similar types of short-term loans to help cover expenses.

“There are lots of teachers that get through the summer going to Amscot and grabbing $500 in the summer when they are not working,” Cruz said. “We talk about people and we talk about this predatory sort of lending, but where in the world do we go? Where do they go?”

‘The meaning of Charlottesville’

‘The meaning of Charlottesville’

Trying To Love Two, Yourself And Money, Ain’t Easy To Do

Trying To Love Two, Yourself And Money, Ain’t Easy To Do […]