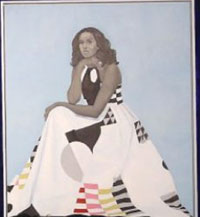 Folks have strong reactions to Barack and Michelle Obama’s portraits

On Monday, the former president and his first lady re-emerged on the public stage in Washington, only this time for an event that is not political.

Barrack and Michelle Obama’s official portraits were unveiled at the Smithsonian’s National Portrait Gallery, a routine practice for most former presidents, all of whom have their portraits hanging in the museum.

Without any doubts, these were the most anticipated presidential portrait unveilings to date. Mr. Obama chose Kehinde Wiley for his portrait because the Yale University-trained painter is famous for his depiction of African-Americans posed in the style of Old Master paintings, formal and filled with pops of color. 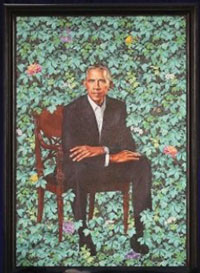 The portrait depicts the 44th president sitting against a backdrop of green foliage. While on the podium, Obama said he tried to negotiate with Wiley about his look for the painting.

Obama also asked Wiley if he could adjust his looks to suit him. “I had to explain that I’ve got enough political problems without you making me look like Napoleon. . . And that’s what he did,” the former president said.

Wiley makes him the first African-American artist to execute an official presidential portrait for the National Portrait Gallery.

Wiley sampled thousands of photographs of Obama to create the portrait, a process different than the typical “sittings” required for most pictures.

Wiley’s background choice was also indicative of Obama’s background. Wiley said he was “charting his path on Earth.”

“I was always struck when I saw his portraits…more especially the degree to which they challenged our ideas of power and privilege,” Obama said.

Obama also pointed out his connection to Wiley, saying that they shared similar familial experiences that shaped their futures.

“We had certain things in common. For instance, both of us had American mothers who raised us with extraordinary love and support. Furthermore, both of us had African fathers who had been absent from our lives, and our journeys involved searching for them. Because I cannot paint, I ended up writing about that journey and channeling it into the work,” he said.

She said she “was a little overwhelmed” after her portrait was unveiled. “Let’s just start by saying, ‘Wow,’ again,” she said.

For her portrait, Michelle Obama chose Baltimore-based artist Amy Sherald, an African-American artist known for her unique style, and her portraits also tend to underscore themes of social justice.

She often paints black skin tones in gray as a way to take away the assigned “color” of her subjects. Sherald’s work is less about realism in composition and more about shape and color; like Wiley, the choice of Sherald ushers in a new era of the presidential portrait.

Sherald’s painting of Mi-chelle Obama shows her in a flowing, patterned dress with a thoughtful expression, her chin resting on her hand.

Mrs. Obama said she was thinking about the impact Sherald’s work will have on “girls and girls of color.”

“I know the kind of impression that this portrait will have on their lives because I was one of those girls,” she said. “The ladies will see an image of someone who looks like them hanging on the walls of this great American institution.”

Director Ava DuVernay said the portraits reminded her to hope while model Chrissy Teigen asked that Barack “come back” and pleaded for Michelle to “help us.”