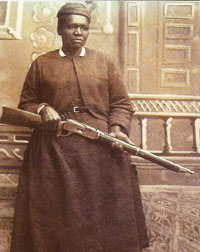 Mary Fields (c.1832-1914) made transportation history as the first African American woman to deliver the U.S. mail. Fields was born a slave in Tennessee, and she achieved her freedom in 1865 when slavery was abolished in the United States. By the mid-1880s, Fields had moved to the Montana Territory. (This territory became a state in 1889.) For several years, Fields worked in the region in such positions as the forewoman at a school for girls and the owner of a restaurant.

In 1895 – when she was more than 60-years-old – she began a career that involved delivering mail. Fields did not become an employee of the U.S. Post Office Department, but was instead awarded a contract to transport mail for the agency on what was called a star route. Postal officials had established these routes in 1845 to help expand the reach of the nation’s mail delivery service. In general, star routes were not for the faint of heart. A number of them were located in far-flung and often rough-and-tumble regions, and those delivering mail along these routes had to be tough, independent, and resourceful.

Fields, who received a star route contract in large part because she hitched a team of six horses more quickly than any other applicant, was definitely up to the challenges of her new position. The six-foot-tall Fields was known as someone who never shrank away from a fight (legend has it that she once fended off a pack of wolves throughout an entire night) and she also carried both a rifle and revolver for protection.

For several years after receiving the star route contract, Fields diligently transported the mail in the vicinity of Cascade, Montana, in the central section of the state. Her unmatched re-liability and determination earned her the nickname “Stage-coach Mary,” even though her usual means of transportation was a horse-pulled wagon. Whenever the snow became too deep for her vehicle, Fields would travel the route on snowshoes to complete her rounds. Fields retired in 1903, leaving a notable legacy not only as a mail carrier but also an African American pioneer.