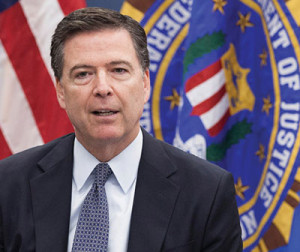 Comey testified before the U.S. SSCI.

During dramatic testimony before the U.S. Senate Select Committee on Intelligence, James Comey, the former Director of the Federal Bureau of Investigation and the nation’s top law enforcement official, called President Donald Trump a liar five times and told 17 U.S. senators and the nation, that he was uncomfortable being in a room alone with him.

Trump fired Comey on May 16, shortly after he requested additional resources from the Justice Department for the investigation into Russia’s interference in the 2016 presidential election, according to The New York Times.

Comey gave a stunning and blunt account of his interactions with President Trump, between January 9 and April 11, 2017. Comey declined to answer some of the senators’ questions due to the sensitive subject matter; the committee convened a classified meeting after the public session.

Additionally, questions by Senator Kamala Harris (D-Calif.) and other senators revealed that Attorney General Jeff Sessions will have more questions to answer about his meeting with Russian Ambassador Sergey Kislyak.

Sen. Harris also asked Comey, “…the Attorney General, did he have access to information about the investigation in those two weeks?”

Comey answered: “In theory, sure, because he’s the Attorney General.” There was an under-current of questions around Jeff Sessions throughout the hearing with Comey, last week.

The backdrop of Comey’s testimony reads like something out of a 1950s spy novel from the Cold War that the bureau’s longest serving Director, J. Edgar Hoover, would have more likely been involved in. In-credibly, less than six months into Trump’s presidency, there is no disputing that the Russian government deliberately interfered with an American presidential election.

In a testament to how far Republicans have gone to lower the bar for Trump, the same party captained by Ronald Reagan in the 1980s to be Russiawary is silent on the prospect that Donald Trump and his associates have unusually close ties to the former Soviet Union.

Some Republicans assert the president was vindicated, because he’s not specifically under investigation, but the investigation is ongoing; who knows where it will lead. Former FBI Director, and now Special Counsel on the Russia matter, Robert Mueller is currently in charge of the investigation.

Mueller has spent the last two weeks hiring high-powered prosecutors. The most impressive higher to date is Andrew Weissmann, who has taken leave from his job from the Justice Department’s criminal fraud section. Weissmann has prosecuted New York mafia figures and former Enron CEO Ken Lay.

Comey’s testimony comes only a day after two Trump Administration intelligence officials, Director National Intelligence Dan Coats and NSA Advisor Michael Rogers, refused to answer questions regarding conversations they had with President Trump, about the Russia investigation during a separate hearing before the Select Intelligence Committee on June 7.

A LOOSE CANNON FOR PEACE?

No, can’t do that! Can’t do that! This screws everything up. “. . . we must be resolute and unambiguous in our approach to those countries whose strategic interests are increasingly in tension with ours,” writes Defense Secretary Jim “Mad Dog” Mattis in his resignation letter to Donald Trump over the issue. […]