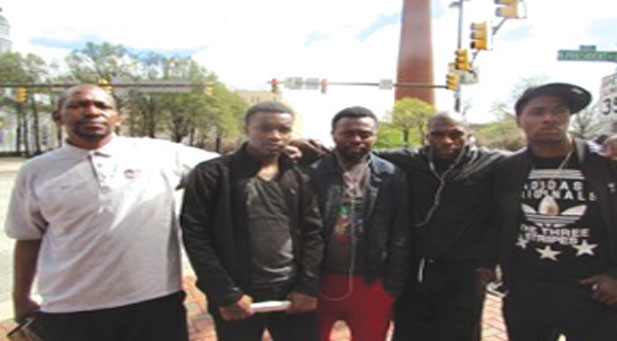 Friends remember Freddie Carlos Gray, 25, as ‘the life of the neighborhood’

By Roberto Alejandro, From the Afro-American Newspaper

“He was the life of the neighborhood,” said William Stewart outside the Baltimore Police headquarters at a protest over the in-custody death of his life-long friend Freddie Carlos Gray that was drawing to a close on April 20.

Freddie Carlos Gray, whose age has been misreported in media accounts (Gray was 25 at the time of his death, not 27 as initially reported, according to friends), died on April 19, a week after an arrest by Balti-more Police near his home in West Baltimore left Gray with a broken neck and in critical condition. Gray is remembered by friends who grew up with him in the Gilmore Homes housing project as someone who was always laughing, brightening the day of those around him.

“He was a good child, a loving child,” said Stewart, who says he has known Gray for over 20 years. “He was the type of per-son, say you were coming out of your house and you’d had a bad day. You’d see him, he would light your day up because he was always laughing, smiling, playing, trying to make every-body feel up.”

“If you knew Freddie, there was never no downside,” said David Reid, who says he has known Gray for almost 26 years (according to Stewart, Gray would have been 26 in August). “He was a laugh, joke type of person. I mean if he’s not rapping a song, he’s dancing to it. If he’s not telling a joke, he’s taking a joke. If he’s not throwing a play punch, he’s catching a play punch. It was all love.”

Davon Johnson also grew up with Gray, and says the two played Pop Warner Football together as kids.

“Every time you saw him, the man always had a smile on his face,” said Johnson. “He wouldn’t hurt a fly. And that just kills me to see how the police just did that man like that. He didn’t deserve that, because there’s some cruddy guys in the world, but Freddie wasn’t one of them. He was loved by everybody.”

At a moment when #BlackLivesMatter has become something of a national refrain, Gray’s friends expressed pain at the callous fact that the media had not even managed to learn and report basic facts about Gray (like his age) accurately, ostensibly relying on official accounts from the same police force that reportedly presided over Gray’s death and apparently did not care enough to get his age right either.

25, as ‘the life of the neighborhood’

Reid expressed pain at the fact that media reports had accurately reported on Gray’s past criminal convictions, but less accurately on basic information about him. However, with respect to Gray’s last name at least, Reid appears to be mistaken.

Court records and the spelling used by the Gray family attorney, Billy Murphy, indicate that the correct spelling is indeed with an ‘a’. Grey with an ‘e’ is listed as one of Gray’s aliases on court documents, and was the initial spelling used by the Baltimore police officers who processed the arrest that resulted in Gray’s death, suggesting Gray himself may have used this spelling at times.

Accuracy in reporting aside, Stewart expressed dismay that his friend’s criminal record had become part of the conversation in the first place.

All three men noted that, whatever mistakes Gray had made in his lifetime, he had never been a violent person—a fact that now stands in stark contrast to the way he died. More than anything, however, Stewart, Reid, and Johnson have lost a life-long friend, the person they relied on to brighten up a neighborhood whose most striking architectural feature are the rows of police cameras that adorn the roofs, constantly monitoring those struggling just to find a reason to smile below.