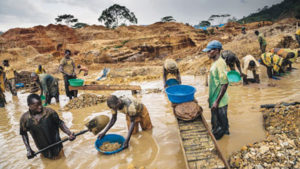 Incredibly in the 21st century some Africans are still working in conditions akin to slavery informally or formally in some areas of the Middle East.

In Mauritania slavery though officially illegal remains a fact of life for an estimated 40,000 slaves still exist the country. Mauritania is rarely mentioned in international media coverage. Conversely, across the Middle East – Qatar is set to host the 2022 FIFA World Cup. Despite repeated international campaigns some Ghanaian workers there are making as little as $40 dollars a week while living in shared accommodation where employers can pack as many as 4 workers into a tiny room according to The Guardian. Terrorists groups around the region use sex slaves.  Slavery, an old evil takes many forms

Mauritania a country with a population of 4 million became the last country to ban slavery in the world in 1983 though the practice has lingered down to the present since. In 2007, the practice was criminalized. Since slavery was criminalized only one criminal conviction has taken place. Often living in near starvation conditions (one journalist reported seeing children eating sand) they have to also deal with the most hurtful forms of abuse.

“Female slaves, both women and girls, were routinely subjected to rape by their masters and forced to bear their children,” reads the 2017 U.S. State Department report on Mauritania, “There were cases in the past where female slaves attempted to prosecute their master. State prosecutors told victims that they could face charges for having children out of wedlock, using children produced from rape as a deterrent to prosecuting slavery.”

Like slavery in the antebellum South a racial component. The Hratine ethnic group who make up 40% of the country’s population and are the entirety of its slave population.  Not all Mauritanians are taking their plight in light laying down.

“The Hratine, sons and grandsons of the Black slave labor, became aware of their humanity, equivalent to that of the masters. Thus…grant[ing] us their votes in the polls,” said Biram Ould Dah Abeid, Mauritania’s best-known anti-slavery activist,” However, resistance to the liberating course of history is [opposed by] conservative segments of Arab-Berber society. The country remains under the domination of a militaro-tribal and affairist oligarchy, welded by the definitive feeling of its superiority.”

Biram Ould Dah Abeid was elected to parliament this year but, was soon imprisoned. Though the work of his unlicensed NGO called the Initiative for the Resurgence of the Abolitionist Movement. Through an intermediary Mr. Dah Abeid answered questions posed to him from the Urban News Service via his prison cell

“We are supporting Biram Dah Abeid in Mauritania, said Présidente Sylvie O’Dy a former journalist and the chair of the Committee Against Modern Slavery (CCEM) based in France,”….CCEM is supporting domestic slavery and forced labor victims in France and advocating against modern slavery worldwide.”

Complicating the fight against slavery is Mauritania is often a pawn in the geopolitical ambitions of other states.

Last year Mauritania joined with several other African and Asian states in a Saudi led blockade of Qatar in order to persuade Qatar to end its practice of close ties with Hamas, the Taliban, and funding for Islamist groups like the Muslim Brotherhood.

While number of Western NGOs are active in the country trying to defeat slavery and end poverty in Mauritania — the Qatar’s efforts have focused often instead on Islamist charities and local affiliates of the Muslim Brotherhood at a time when Mauritania is struggling to stamp out slavery.

In September, Mauritania’s government accused Qatar of supporting the local chapter of the Muslim Brotherhood – “Tawasol” which was legalized in 2007 – the same year that Mauritania criminalized slavery.

Biram Dah Abeid blames the international community and the Gulf states for the continuation of slavery in his country,

“Through petrodollars, important programs of Wahhabi obscurantism, which reinforces the ideology of religious extremism and enslaved practices that ensues. These partners – Saudi Arabia in the lead – import, from our country, especially girls Haratine, as domestic [workers] or concubines. “

One Mauritanian who succumbed to what Abeid calls this “Obscurantism” is Mahfouz Ould al-Walid, also known as Abu Hafs al-Muritani who is a former member of Al Qaeda.

In his will al-Walid was famously left $29 million by Osama Bin Ladin. Mahfouz returned to Mauritania in 2012 after living in Iran. After serving a prison sentence he emerged from jail and has made television appearances for Qatari media outlets condemning the United States and not surprisingly supporting Qatar in its feud with the United States.

Al-Qaeda under Osama Bin Ladin and their allies the Taliban both used sex slaves. A practice that has been adopted with relish by terrorist groups in Africa. Boko Haram, Al-Shabab and Al Qaeda in the Islamic Magreb have all been documented for using slaves.

However, perhaps no labor situation has attracted the attention of labor groups that that of the workers building the stadiums and supporting infrastructure for the 2022 FIFA World Cup.

An investigation released by The Guardian in November found that African guest workers from Ghana were forced to work for paltry salaries in the richest country in the world.

“For building one of the prestige stadiums designed so Qatar can dazzle the world in 2022, eight hours a day, six days a week, this is £140: a little under £35 per week; £5 per day,” the article stated.

There is no formal minimum wage in the country and a temporary stop-gap see it still set to be around 40 dollars a week.

While Qatar has worked to improve such will do little for workers who already. Ghanaian workers say that food, accommodation and laundry services are provided to “guest workers” it is no hotel with some 4 people in a single room. Workers must bare other costs such as paying back “Recruiters” who often.

Qatar has also built a vast Labor City including some recreational facilities which behind high walls and railings for those working on its World Cup stadiums.

“[There are] 18,000 workers building the stadiums – less than 2% of Qatar’s construction workforce,” says Ahmed Benchemsi the Middle East spokesperson for Human Rights Watch,” Rights and welfare guarantees given to those should extend to other workers.”

An investigation published by Lebanese newspaper Daily Star titled “Bangladeshi Workers: 300 left to rot in a Qatar camp” detailed how Bangladeshi guest workers had been largely abandoned in a labor camp when their project was put on hold. Two meals a day were donated from a Qatari charity but, the site had no running water or electricity most hours of the day.

Last year Qatar government moved quickly to work with the ILO an investigation.

work with the ILO on a programme of reforms. The Qatari government has been adamant. Qatar races to finish the World Cup however, many worries that safety and human rights will come second to the need.

“The Qatari government has pledged to align its laws and practices with international labor standards,” says Ahmed Benchemsi the Middle East spokesperson for Human Rights Watch “through a program of cooperation with the International Labor Organization. However, the implementation of the promised reforms is taking a lot of time, and the government hasn’t published a timetable. “

Benchemsi highlighted the fact that domestic workers must receive the permission of their employers. Some countries have considered banning their nationals from being exported to the Gulf as domestic workers – Mauritania is not one of these.

Such workers often work and live in isolated conditions on elite Qatar compounds. Despite a recent labor reform domestic staff who fear abuse must still get the permission of their employers to leave the country. Families who employ such workers often site potential thefts as one of the reasons they should control the movement of their guest workers. Much of the labor issues surrounding Qatar also apply to its neighboring states in the region.