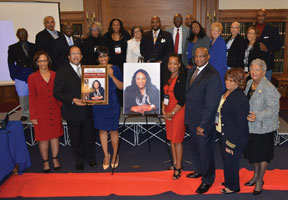 Family, friends and more than a dozen NNPA members and staffers joined Chida Warren-Darby, the co-publisher of The San Diego Voice and Viewpoint (1st row, 3rd from left), for the enshrinement ceremony dedicated to her mother and former publisher, the late Gerri Warren at Howard University in Washington, D.C. during the 2016 Black Press Week.  (Roy Lewis/NNPA)

For those who knew Gerri Warren, it wasn’t unusual to see her walking around the offices of The San Diego Voice & Viewpoint or at community events with a smile that could light up the room.

It was a smile that those close to her said grabbed attention, and for all the right reasons.

“Ms. Warren wore many hats and she touched so many lives,” said Jackie Hampton, the publisher of The Mississippi Link and the enshrinement chair for the National Newspaper Publishers Association (NNPA) Gallery of Distinguished Black Publishers.

On Thursday, March 10, Hampton was joined by NNPA Chair and Washington Informer Publisher Denise Rolark Barnes, NNPA President and CEO Dr. Benjamin Chavis and a host of others at Howard University to posthumously enshrine Warren, who rightly was installed next to other Black Press icons.

“This is where we have the opportunity to say to others that we must strive to emulate those like Gerri Warren as publishers,” said Dorothy Leavell, the publisher of the famed Chicago Crusader newspaper.

“There are people who genuinely understand the importance of what we, as publishers, are doing. Gerri started as a teen and it wasn’t until her 30s that a light bulb went off that said ‘what you’re doing is important’ and she raised hell and demonstrated that we have a fantastic group of publishers in the Black Press,” Leavell said.

Rolark-Barnes called the occasion one of those sad, but happy, times in which the NNPA – a coalition of over 200 Black newspaper publishers from around the country – can gather and take advantage of the opportunity to honor the legacy of one of its esteemed publishers.

Addressing Chida Warren-Darby, Warren’s daughter who recently joined her father Dr. John E. Warren as co-publishers of her mother’s newspaper, Rolark-Barnes said she was fond of the late publisher and proud of her legacy.

“I knew your mom and dad who was on the City Council here in D.C. and when they decided to move to San Diego we lost two great people,” Rolark-Barnes said.

Chavis, the longtime civil rights activist and icon, said he was grateful to have a chance to honor Warren.

“She’s one of our leaders and this candle that we lit today for Gerri Warren will always live in our lives and long live the spirit and legacy of the Black Press,” Chavis said.

For more than five decades, The San Diego Voice & Viewpoint has reported on news from an African-American perspective.

As San Diego’s largest African-American publication, the paper has featured individuals and events in a comprehensive manner, while commentators have argued from different points of view in its lively op-ed pages.

The Voice & Viewpoint has grown over the last decade to over 350 newsstands and outlets in convenience stores and the paper can be found in all 89 zip codes of San Diego and has readership of more than 60,000.

Warren-Darby, who became one of the youngest newspaper publishers in the country, has carried her mother’s torch in an award-winning manner.

She said she was honored to be present as the NNPA enshrined Warren, who died in 2009.

“She was a people person,” Warren-Darby said. “She made time for people and she was never too busy to talk to anyone. She made sure that everyone knew they were important.”

Chida Warren-Darby said it is her mother’s smile and her laugh that she often thinks of.

“It was her secret weapon,” Warren-Darby said. “That infectious laugh and smile opened many a door and, yes, I’ve adopted that too.”

The reluctance to come forward after being sexually harassed

Whether in the case of Anita Hill or Christine Ford, the word of a woman is not simply challenged but vilified should she choose to speak up against alleged sexual misconduct. Such a scenario discourages anyone from coming forward. […]