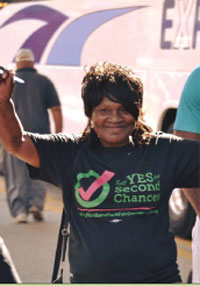 By Linda M. ThigpenGetting Out the Vote: Restoration of Rights; “Yes” on Amendment 4

We know, all too well, there is no perfect person, place or thing. People are flawed, places fail expectation and things fade. It’s the reality of things. Even so, we strive to improve imperfections in people, make the best of places we visit and spend time restoring things tarnished.

Correcting a wrong or getting a second chance to make better is the embodiment of the spirit of redemption—and Amendment 4. One definition of redemption describes the improving of something: “The act of saving something or somebody from a declined, dilapidated, or corrupt state and restoring it, him, or her to a better condition.” Restoring the voting rights of approximately 1.7 million ex-offenders is a significant step in bettering their conditions.

The intent of Amendment 4 is to automatically restore voting rights to individuals with prior felony convictions, except for those convicted of murder or a felony sexual offense, upon completion of their sentences, including prison, parole, and probation. The ballot language is as follows:  “This amendment restores the voting rights of Floridians with felony convictions after they complete all terms of their sentence including parole or probation.  The amendment would not apply to those convicted or murder or sexual offenses, who would continue to be permanently barred from voting unless the Governor and Cabinet vote to restore their voting rights on a case by case basis.”

A “Yes” for this constitutional change in November is paramount to non-violent offenders. To be sure, it punctuates the consequences of elections and who we put in offices.

Under former Florida Governor Charlie Christ, the Executive Clemency Board automatically restored rights of felons completing their sentences who paid restitution with no pending charges. Then, enters Governor Rick Scott’s Administration, thereby, eliminating reforms made by Christ’s Administration. Subsequently, convicted felons must wait five or seven years (depending on type of offense) after the completion of their sentences to request board consideration of their voting and other civil rights. This policy still remains as of 2018, with persons having prior felonies never regaining their right to vote in Florida. However, there is hope.  In a few weeks, Floridians can change it with 60% of voters—voting in the affirmative!

A 2016 report from the Sentencing Project estimated Florida to have 1,686,318 (10.43%) of the voting age population–disenfranchised due to felonies. Florida had the highest rate of felons disenfranchised in the United States. Critical to note, the margin of victory in gubernatorial races in 2010 and 2014 elections was 1.2% and l.0%, respectively. Not to mention, the margins in presidential elections were 0.9% in 2012 and 1.2% in 2016. It doesn’t take a rocket scientist to see the significant impact of “enfranchised ex-offenders” on voting rolls and who gets elected by them.

Supporting the amendment is Floridians for a Fair Democracy. Instrumental in championing the amendment is campaign chair, Desmond Meade who is also president of the Florida Rights Restoration Coalition. Kudos goes to Mr. Meade, favoring organizations, officials, activists and citizen volunteers working for its passage. To share, parenthetically, gubernatorial democrat nominee, Andrew Gillum is in support of Amendment 4.

Amendment 4 reached the ballot after more than 800,000 Floridians signed a citizen petition.  November 6th will be a referendum on the fruits of our labor in accomplishing our goal.  As a supporter and one who put in lot of “sweat equity“obtaining signatures, it was heart-warming upon receiving news enough had been obtained for ballot approval. As of 2018, Florida is among three other states—Iowa, Kentucky and Virginia—where convicted felons do not regain rights to vote until it is restored by a state officer or board.

Redeeming voting rights restores dignity to those who have paid their debt to society. The right to vote is a basic constitutional right that should not be taken away solely for political reasons.

Amendment 4 and it’s ramifications hits close to home for many of our families, friends and neighbors.  Showing up at the polls in support of this amendment and ensuring its success offers a second chance to those most in need of it and who are some of the most vulnerable amongst us. It is, without a doubt, the right thing to do!

Turn out during this general election can make it happen for each of them. We must educate and share with others what is at stake.  This general election season is probably the most consequential of our times in Florida and in other parts of our nation.  Andrew Gillum, Bill Nelson, Sean Shaw, Stacey Abrams and Ben Jealous would attest to that.

Getting out the vote is incumbent upon each of us—to benefit all candidates.  While this article is a clarion call for second chances for non-violent offenders, we still must be cognizant of — and be ready to face some hard realities.  If we do not show up and show out to vote this November, there are somethings we may “never” get a second chance to do.

The time is ripe; we are poised and ready to go. Florida, it’s time to show-out!

Linda M. Thigpen, Pembroke Pines Committee-woman, will be opining as a guest columnist for the upcoming weeks offering tips and voter education information.  Please contact her at 305 804 7195 or email: Lindathigp@aol.com for voter engagement activities. Reference information from Ballotpedia & The Sentencing Project.