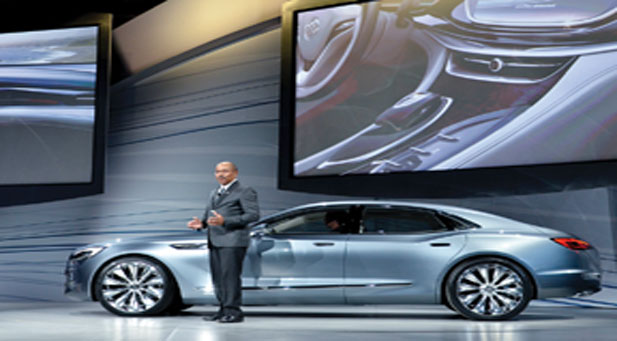 DETROIT, MI (NNPA) – During the media week leading up to the 2015 North American International Auto Show, General Motors (GM) not only revealed new models and concept cars like other automakers, they also showcased the importance of diversity in the company’s ranks.

At “Design by Detroit,” an event hosted by GM that featured local artists, industry insiders and a custom-painted Stingray, three young, minority designers shared their experiences working for the embattled, century-old auto company.

Ven Lai, the lead creative designer for the Chevrolet Color and Trim Studio, said that after joining GM in 2007, she learned that the company appreciated passion for design and that when artists from different cultures and backgrounds lend their input to the process, the car, the customer and the brand benefit.

“As designers, we’ve been empowered,” said Windham in her official press bio. “There is an exciting renaissance at GM and I am thrilled to be a part of it.”

Martin Davis, the design manager for the Exterior lighting and North American exterior Design, said that Windham has already left her mark on the interior design of Chevrolet passenger cars and that consumers will see even more of her influence on that segment very shortly as new products are rolled out.

Davis, who led the team that redesigned the exterior lighting for the new Cadillac Escalade said that working on the iconic sports utility vehicle was humbling and surreal.

“But you quickly get past that and embrace the challenge,” said Davis, who started his career with GM when he was 22 years old. “Working with new technologies like [light emitting diodes] enables us to do a number of things we haven’t done before.”

Davis continued: “There’s always that risk of being able to deliver on a design that you have sold to senior leadership and they are expecting your design to work.”

Ed Welburn, vice president of Global Design and General Motors, said that he still loves the look on a designer’s face when their concept is selected for a new project.

“I don’t care if they’re right out of school or if they’ve been with the company 40 years,” Welburn smiled. “They have that look on their face like they’re 8 years old.”

Welburn, who studied sculpture and design at Howard University and joined the automaker when President Richard Nixon was still in the White House, is the first executive to lead all of the company’s Global Design Centers in the United States, Germany, Korea, China, Australia, Brazil and India. The GM veteran said that he enjoyed knitting together a global team of studios, where everyone really knows and supports one another.

“It helps us understand our customers a whole lot better. Everyone brings some creative thought to the process that may be a bit unique in one way or another,” said Welburn. “I think we really benefit from that.”

Like cultural diversity overseas, Welburn said gender and ethnic diversity in the United States is extremely important to GM and considers his involvement in the evolving diversity mission at GM a part of his legacy. He admitted that there are not nearly as many Blacks and other minorities in the company as he would like.

Welburn met with the president of the College for Creative Studies in Detroit, Mich., and learned that the school was also having a tough time enrolling African American students.

A 2014 study on STEM workers by the Joint Center for Political and Economic Studies, a nonpartisan think tank focused on racial equity, reported that Blacks account for less than 4 percent of workers in science and engineering jobs. Meanwhile, industries that are more dependent on STEM-related workers are expected to grow at nearly twice the rate as sectors that are less dependent on STEM workers.

That’s why the decorated auto exec is working with Detroit-area middle school and high school students, mostly African American, to identify the ones who want to attend CCS and offers them scholarships.

Anita Burke, the chief engineer of the GMC Canyon, a mid-sized truck, said that when she was younger, women didn’t go into design or engineering. That was considered men’s work. Burke thought about going into nursing or teaching, because that is what people expected her to do.

A chance conversation with a chemistry teacher who noticed her aptitude for math and science during her junior year in high school and encouragement from an older brother steered her away from nursing and into engineering.

“One of the things I’ve taken most from my career at General Motors is my best experiences have come when I stepped out of my comfort zone,” said Burke.

Burke took on two international assignments during her tenure at GM. She spent about three years in Toluca, Mexico and three and half years in Sao Paulo Brazil managing engineering groups and directing aftersales engineering.

“It was something I never would have imagined that I was going to do with my career coming out of college,” said Burke, a graduate of the Illinois Institute of Technology. “That was my first step out of my comfort zone and I learned from that, ‘Wow, the best things come from those [experiences].’”

Burke added: “If I didn’t step out of my comfort zone, I wouldn’t be chief engineer of this truck and it’s been my dream job.”

Burke said that it’s not only important that young women and minorities feel empowered to pursue STEM degrees, but that they also feel welcomed to pursue STEM careers. That’s the only way that the auto industry and many others will start viewing their presence in science and math fields as the norm.

“Many kids these days have zero understanding of what the auto industry is and depth of the things that you can do,” said Burke.

She explained, “You don’t have to be a CEO of a company, if that’s really not your passion, you just gotta love what you do.”

“You can have a wonderful very fulfilling career in design,” said Welburn. “But the most important thing for me – I think it’s true for every young person – you need to go into a field that you’re passionate about whether its design or music or journalism. If you’re not passionate about it, don’t do it.”