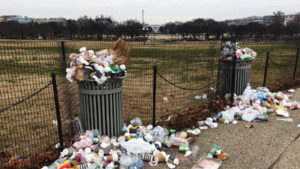 Federal employees went back to work Monday after the longest shutdown in government history — but the economic effects will be felt for a long time.

A report released Monday by the nonpartisan Congressional Budget Office found that the economy took an $11 billion hit, including $3 billion that’s gone forever, in the 35 days that parts of the federal government went unfunded.

“In CBO’s estimation, the shutdown dampened economic activity mainly because of the loss of furloughed federal workers’ contribution to GDP, the delay in federal spending on goods and services, and the reduction in aggregate demand,” the report said.

And that may just be the tip of the economic iceberg.

“Underlying those effects on the overall economy are much more significant effects on individual businesses and workers. Among those who experienced the largest and most direct negative effects are federal workers who faced delayed compensation and private-sector entities that lost business. Some of those private-sector entities will never recoup that lost income,” the report said.

The CBO said its estimates “do not incorporate other, more indirect negative effects of the shutdown, which are more difficult to quantify but were probably becoming more significant as it continued.”

“For example, some businesses could not obtain federal permits and certifications, and others faced reduced access to loans provided by the federal government. Such factors were probably beginning to lead firms to postpone investment and hiring decisions,” the report said.

House Speaker Nancy Pelosi, D-Calif., said in a statement that the report shows that “the President’s shutdown inflicted needless pain and chaos in the lives of millions of Americans, and stole billions of dollars from the economy.”

“When the Congress completes its bipartisan, bicameral work to fund government, the President should swiftly sign that legislation to avert another shutdown and restore certainty to our economy and the lives of the American people,” she said.

“I won’t acknowledge any of that right now,” he said, predicting the shutdown would not affect the country’s GDP.

“There’s certainly no permanent damage to the economy,” Kudlow said, saying the biggest issue has been “hardships for individuals.”

An FAA official said among the agency’s top priorities will be reopening their training facility in Oklahoma City and approving new flight routes that were supposed to have been given the green light earlier this month.

Other agencies took to Twitter to express their gratitude.

The U.S. Department of Agriculture tweeted from its official account that employees were “really happy to all be back at work,” repeating the word “really” 19 times.

The FBI tweeted that it “would like to thank all the individuals, businesses, and organizations that provided support and assistance to our employees and to all federal workers during the government shutdown. We are proud to serve this country.”

FBI Director Christopher Wray had sent out a video message on Friday — shortly before a temporary deal to end the shutdown was announced — saying, “Making some people stay home when they don’t want to, and making others show up without pay, it’s mind-boggling, it’s shortsighted and it’s unfair.”

Employees who missed two paychecks were skittish that they could find themselves back in the same position in three weeks, when the deal Congress struck with President Donald Trump expires. Trump has continued to demand that Congress give him $5.7 billion in border wall funds, and suggested on Friday he could shut the government down again if he doesn’t get his way.

Willard Jenkins, a 22-year civilian Coast Guard employee in Elizabeth City, North Carolina, urged for cooler heads to prevail in the coming weeks. Jenkins, who said he voted for Trump, told MSNBC, “I understand your concept about the borders have to be secured. Yes I do. How you’re going about it, by no means do I agree. You are holding the very people who voted for you hostage. You can’t do that.”

“It’s very scary to know that that in 21 days it can happen all over again,” Becky Mancha, a Transportation Security Administration officer at Dallas Love Field Airport, told NBC Dallas-Fort Worth. She said she’d already canceled medical appointments and pushed off a deal to buy a house, and will now try to put away some money for fear of the same thing happening again next month.

“It’s hard to know that I have to go through this when I’m doing my job,” she said.

White House Press Secretary Sarah Sanders told reporters Monday that “the president doesn’t want to go through another shutdown. That’s not the goal. The goal is border security.” She suggested worried federal workers should call their Democratic representatives to push them to make a deal.

Thousands of people, including a cadre of faith leaders from the Reconciled Church Movement (RCM), that represents various faith-based communities, joined the Rev. Al Sharpton and members of his nonprofit National Action Network (NAN) in Washington, D.C. to rebuke President Donald Trump and recommit themselves to the fight for social and economic justice. […]

Union officials want a full investigation into a senior department leader who prominently displayed this painting of a Ku Klux Klan leader in his office. […]

Is the Migrant Caravan Real or A Fabricated Masquerade?

These caravans were started 15 years ago, and in 2018 the situation has reached human rights conditions, because with the election of President Juan Orlando Hernandez in Honduras, there is a military enforced curfew, and 30 activists have been killed after his election. […]