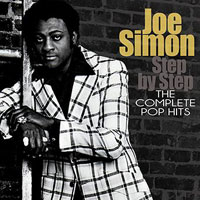 Someone was looking for some music, they found and discovered some Joe Simon music, put it out on a double disc CD and titled it “Step By Step The Complete Pop Hits.” There is a song on the CD called “Nine Pound Steel.” Nine Pound Steel by Joe Simon, along with all the other songs on the double CD is newly digitally remastered and has been placed on the Real Gone Music record label. This song “Nine Pound Steel” performed by Joe Simon is about jail and prison as well as life. It deals with wrongdoing and accusations of wrongdoing. The song “Nine Pound Steel” is world renowned and it has international support on why and how jail and prison can affect the mind and behavior of a correctional facility inmate.

Joe Simon says, “When jail and prison facilities do not house programs to help and reform inmates it is a sad day for the mind and a sad day for the nation. Jail and prison affect the mind, the heart, the family, schools, the institutions and the community. Many times, many people are in jail and in prison without being physically held in official correctional facilities and when kids are separated from their parents and detained it is very destructive and painful. It is like a plague. The kids suffer psychological damage amongst a host of other illnesses and experience jail and prisonlike conditions.” The imprisonment of jail and prison inmates is real, and it is very serious.

What is jail? Jail is a place of confinement for persons held in lawful custody. What is prison? Prison is a state of confinement or captivity. The body-mind connection can affect your physical state and being in jail or in prison the mind can in-fluence how you think, how you feel and how you behave. We need to have a conversation about jails and prisons. Those of us who are not in jail or in prison we need to be, and we should be a role model to those who are incarcerated.