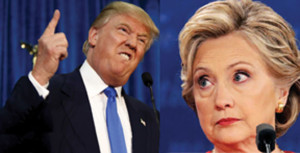 Hillary Clinton should not endure another debate with Donald Trump

(TriceEdneyWire.com) – Hillary Clinton should not endure another debate with Donald Trump.

He has already shown himself as bigoted against immigrants, Mexicans, Muslims, Blacks, and prisoners of War, such a U.S. Senator John McCain.

He is also a man who calls women “pigs” and gloats over his deftness at grabbing their private parts.

This may be a titillating resume for a reality TV star, but certainly not for the president of the most powerful nation on the planet.

This entire year instead of being inspired as I watched the election debates, I have felt that the American public, politicians and the press have been dragged down into the depths of a dark, dank sewer with the manhole slammed shut.

The stench has overshadowed real issues, such as the poisoned population of Flint, Michigan, the Black men murdered by police for walking or running while breathing, the carnage of murdered little children piling up in our bloody inner cities and the homeless families increasing because of builders like Trump pricing the poor and middle class out of the housing market.

As a shining example of what one group the Donald caters to is the new Trump hotel in the nation’s capital where one night’s lodging starts at $800 and soars into the thousands. If you are not a millionaire or someone who delights in demeaning, despicable conduct, why else would you follow Trump?

Historically our democratic system based on a living and expensive Constitution has allowed us through much toil and pain to rise above the base, selfish, ugly acts of dangerous extremisms. As shown in the recently released video tape, what Trump stands for we don’t need, in fact, his values demean us here at home and in the world.

Groping women is not normal. It is unnatural. It is brutish. It is sexual assault. To pass this off as just “locker room” talk sends a message that the foulest vulgarity is fine as long as it is shared behind closed doors. Instead of encouraging the public to cleanse ourselves of hateful, demeaning behavior his solution is to offend and as-sault those you deem vulnerable and of little value.

The kind of language Trump uses provides comfort to a tyrannical male supervisor, abusive husbands, those who delight in bullying girls and young boys who would see men like Trump as role models. Trump’s words, however, are also demeaning to “normal” men-fathers, husbands, friends who value women as under-serving of scorn and do not find vulgar locker room talk as acceptable.

In the last debate Trump continued his race to the bottom by dragging into the debate hall, a cast of alleged participants in the sex life of ex-President Bill Clinton. Whether Clinton’s accusers are right or wrong, Bill is not running for president. Hillary is and she should not be blamed because she happens to be in the midst of men who have or are acting badly.

In fact, maybe all this misplaced testosterone may be one more reason why we should elect a woman president. Yet, when I look at this pathetic muddy mess, I am inspired that when I look at President Obama, I see a man who honors his wife, dotes on fatherhood and whose life-both private and public-has not been touched by sexual scandals.

With me, I have been fired up and angry with Trump from the onset over his dogged determination of trying to prove that President Obama was unfit to be President by accusing him of not being born in America, even after President Obama showed his birth certificates. This habitual actions of the privileged class trying to force Blacks to prove the obvious that water is wet and the sky is blue profiles us as outsiders, unworthy of belonging in whatever space we occupy, whether it is as a journalist, wife, or even president of the United States.

Yet, while President Obama has served his term with excellence as Commander in Chief, restoring the sick economy left by his GOP predecessors, the Trumpeters are still trying to tarnish his legacy…Days after the debate, Hillary is leading in some polls by double digits. I see no reason why she should allow Trump to rub more sleaze on her by participating with him in any more public forums.

We know enough about Donald Trump. Let Trump be Trump and stand alone and continue to embarrass himself while the rest of us prepare to elect someone to the White House who can bring us together and continue an honored career as a public servant. And that of course is Hillary Clinton.

From this point on, Hillary should stand on a stage by herself and let her experience, temperament, character and knowledge of the issues shine through. Let Trump star in his own X-rated series alone… The rest of us have had enough of him and we have better things to do like preparing to go to the polls Nov. 8 and taking someone with us.

The Rev. Dr. Barbara Reynolds, an award-winning journalist, author, and activist, is a freelance columnist and was a founding editor of USA Today.

with a message of faith and love amongst her campaign stops to rally voters in South Florida this past weekend. […]