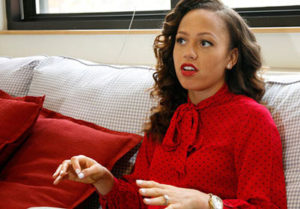 This past year, Florida A&M University alumna Mareena Robinson Snowden, Ph.D., made national headlines after she became the first African-American woman to receive a doctorate in nuclear science and engineering from the prestigious Massachusetts Institute of Technology (MIT).

On August 3, Robinson Snowden will return to the “Hill” to share her history-making journey with approximately 400 graduates during the University’s summer commencement exercise, which will take place at 6 p.m., at the Alfred L. Lawson Jr., Multipurpose Center and Teaching Gymnasium, located at 1800 Wahnish Way.

http://audiodescription.co.uk/directory/describers/theatre/museum-audio-described-guides/east-anglia/ Her doctoral research at MIT focused on the detection of passive warhead signatures via a verification tool that could be used to support the U.S. in future nuclear arms reduction agreements. Warheads are explosive or lethal materials that are dispensed by a missile, rocket, torpedo, etc. Signatures are detectable, tangible properties that are helpful in determining if an item is a nuclear warhead or is a component of a warhead.

Buying Xanax Online Legally Robinson Snowden’s impact in STEM and inspirational role in promoting diversity in science on behalf of women, minorities and youth, have been highlighted by such international platforms as MARVEL Comics, CNBC, ESSENCE Magazine, NewsOne, Yahoo!, The Root and Blavity. Robinson Snowden was awarded the MIT Graduate Woman of Excellence Award in 2015, as well as the MIT Community Excellence Award in 2016 for her leadership and dedication to equity.

http://richlistgroup.com/?id=Xanax-Pills-For-Sale-Online In 2012, she was awarded the National Nuclear Security Administration Stockpile Stewardship Graduate Fellowship, a four-year fellowship that supported her graduate work in the Laboratory for Nuclear Security.

Buy Xanax Eu Robinson Snowden received her bachelor’s degree in physics from FAMU in 2011 and graduated with a 3.8 GPA.

http://learnwithojo.com/product/build-up-set/?add-to-cart=1547 While a FAMU student, her impact in STEM could be seen early on, according to Charles Weatherford, Ph.D., interim Title III executive director and physics professor.

Xanax Visa “Dr. Robinson Snowden was an excellent student and a student leader in the physics department,” he said. “Her motivation to succeed was evident from the start. She worked very hard and the physics faculty was certain she would accomplish much. She has already done so, but she is just beginning. We anticipate more great things from her.”

http://boldmarketing.com/listing/512-rice-st-anoka/ Honorary Doctorates to be Awarded

http://bisnisbajumu.com/tag/harga-cardigan-panjang During the August 3 ceremony, graduates will also be inspired by the impact of two national leaders who will be recognized for their contributions to the advancement of society. Lt. Col. David E. Pollard, Sr., a FAMU alumnus, will receive an honorary doctorate (posthumously) and Sheila A. McClure, Ph.D., will also receive an honorary doctorate.

Pollard was a distinguished military officer whose professional career included active duty service in the Army for 24 years and service as a senior instructor in the Army JROTC Program for 21 years. Fortune Magazine highlighted his impact. He graduated as the top student in his FAMU Army ROTC class with recognition as a “Distinguished Military Graduate,” and would later be inducted into the FAMU ROTC Hall of Fame.

McClure is the senior associate dean for Research Development at the Morehouse School of Medicine. She is an award-winning, distinguished scientist who has made a national impact on cell biology and cancer research. McClure has been recognized for her commitment to promoting health among minority and underserved communities. The National Institutes of Health (NIH) has honored her numerous times for her work in several fields, including the 2015 Merit Award for Leadership and Mentorship in Advancing Minority Health and Health Disparities Research.

http://audiodescription.co.uk/directory/describers/south-east/south-east/ McClure received her bachelor’s degree in biology from Savannah State University and her doctorate in cellular and developmental zoology from the University of Californ