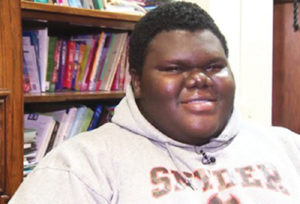 Dylan Chidick, the homeless teen who has been accepted into 17 colleges.

(JERSEY CITY, N.J.)  — Dylan Chidick, a 17-year-old teenager from New Jersey who has had several challenges including homelessness, has recently been accepted to 17 colleges. He is determined to be the first in his family to go to college.

“The dream I want to achieve, I have to have a lot of determination,” Dylan, who moved to the US from Trinidad at the age of 7, told CBS.

Life has been tough for him and family. His younger twin brothers both have serious heart illnesses and they have been in and out of homelessness.

“My family went through a lot and there has been a lot of people saying, ‘you can’t do that,’ or ‘you’re not going to achieve this,’ and me — getting these acceptances — kind of verifies what I have been saying. I can do it and I will do it,” he said.

He has already proven himself as the senior class president at Henry Snyder High School and a member of the honor society. Now, he wants to enter college to achieve his dreams for his family.

His mother, Khadine Phillip, took courage to ask for help from the non-profit “Women Rising” and Dylan is more than grateful for it.

“Making herself vulnerable and putting herself out there, that made me determined to never let us get back in that situation again,” Dylan said.

“She is a great example in doing everything necessary to help her children,” Roseann Mazzeo, executive director for Women Rising, said.

The organization was the one who provided them permanent supportive housing as Dylan expects for his last acceptance letter from the College of New Jersey, which is his “top school right now.”

Moreover, all the costs for his college applications have been waived, considering his financial situation. Once he picked his preferred college, he said he wants to study political science.