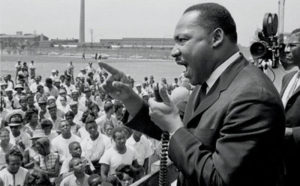 Honor Dr. King by Recommitting to His Goal of Equality

On April 4th, America lost an iconic figure to a bullet.

On that day fifty years ago, the Rev. Dr. Martin Luther King Jr. was cut down on the balcony of a Memphis hotel. Since then, we’ve seen his rich legacy reduced to legend and used to support a variety of agendas, particularly how hard work and merit result in upward mobility.

Lost in all of this is a harsh reality that should not be forgotten by anyone who cherishes Dr. King’s life and commemorates the anniversary of his death: fostering true equality between the races is, at best, difficult.

In the upcoming April 9, 2018 issue of Time Magazine, Dr. Eddie S. Glaude Jr. paints a sober picture of the dark days of the civil rights movement, when the “human capacity of evil” often left Dr. King in a deep de-pression. “Near the end of his life, King confronted the uncertainty of his moral vision,” Glaude writes. “He had underestimated how deeply the belief that white people matter more than others – what I call the value gap – was ingrained in the habits of American life.”

“King did not craft this conclusion from thin air,” Glaude continues. “This was a lesson learned from experience. The brutality of the South and the hy-pocrisy of the country led him to conclude that the view of the racial equality as a charitable enterprise distorted the principles of democracy itself and disfigured the moral character of those who believed the lie.”

Today, fifty years after Dr. King’s death, the phrase “the struggle continues” is more than an understatement; it remains a challenge for all men and women of good will and members of every race, ethnic group, religious preference and sexual orientation to pick up King’s mantle and reach for the American ideal.

As a nation, we should be ashamed of our current lack of civil discourse. It is too easy to shout from separate ide-ological camps rather than come together to address problems that plague us all.

For example, in Broward County, the rate of Black infant mortality is three times that of white infants. We know that by providing better support for programs focusing on the prenatal, labor, and postpartum needs of Black women, we can ensure that our Black babies thrive and survive.  Yet, the gap remains.

The same can be said about the ra-cial gap in unemployment. While the national unemployment rate is low, Black unemployment is still almost twice that of white unemployment, an enduring disparity that is rooted in bias, discriminatory hiring practices, and limited access to opportunities.

We should also take no pride in our nation’s enduring income and wealth disparities. In a recent study conducted by the Equality of Opportunity Project, researchers from the U.S. Census Bureau, Harvard, and Stanford show that while white male children from well-off families are likely to remain wealthy, Black male children raised in similar circumstances are more likely to lose their affluence and become poor. In fact, regardless of family income, Black men will fare worse than their white counterparts.

No one said the struggle for equality would be easy. However, giving in to despair and declaring defeat is not an option. That would simply be an af-front to the life of Dr. King and the legacy he hoped to achieve.

Now is not the time to quit, but to build on each small accomplishment that leads us to a better society. On the anniversary of Dr. King’s death, the need for all Americans to come together and confront the issues that divide is as clear today as it was 50 years ago.

Germaine Smith Baugh is president and CEO of the Urban League of Broward County.

Her passion about education and her desire to create opportunities for HBCU students are two of the many reasons she partnered with the NNPA and Chevrolet, the program’s sponsor. […]

Black AIDS Institute is launching a Black Women and PrEP Tool Kit, offering direct services for Black women in our prevention clinic in Los Angeles, and announcing that we will conduct a series of summits nationwide to increase capacity for advocacy and education around PrEP (pre-exposure prophylaxis) access  for Black women. […]

Our 10-point plan for police accountability

Our 10-point plan for police accountability
[…]