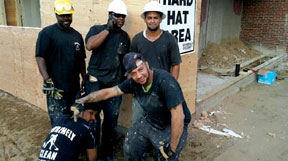 The Huffington Post reports that a Massachusetts construction company is trying to hire ex-convicts in order to help them start a better life after prison. Extremely Clean 2 Construction and Design in Springfield has been in operation for seven years, and counts about 50 ex-cons among its employees. Business owner Jenal Rentas is a former inmate himself, and says that he wants to help other formerly incarcerated individuals get the tools they need to stay out of the prison system.

“I give them skills for where they can go and work for just about any other contractor and be helpful,” he told the Huffington Post. “They make themselves irreplaceable.” This initiative is a valuable one in the modern U.S. work climate, where recidivism is extremely high. According to data from the Bureau of Labor Statistics, 68 percent of released prisoners get arrested for a new crime within three years of leaving prison.

While employment can be difficult to find for many former convicts, it’s not as simple as people not wanting to hire them. According to a report from the Center for Economic and Policy Research, not only is there a negative stigma to deal with, but during their time in prison, many convicts lose social relationships that could help them secure employment. In ad-dition, they also lack opportunities to gain job experience, education, as well as valuable skills that can help them qualify for positions.

Rentas experienced this very issue himself after an 11-year prison stint. “That question on the application — ‘Have you been incarcerated?’ — shut the door on a lot of opportunities,” he reflected. The lack of opportunities drove him to create his own business. Now, he also works to make his employees skilled candidates for future construction work, giving them training for vital skills like roofing, siding and installing shingles, and other important things.

“They get supervising training, we have safety classes, we go to trainings from the roofing companies so they can get skilled in that, or the manufacturers of the products have training sessions they do for free and I always make my guys go,” Rentas said. “My guys are well-rounded. We do every-thing.”

With a combination of no-nonsense attitude, discipline, and value, Rentas’ work has been a true success. He notes that out of the 50 inmates employed, only four have gone back to prison. Several of his employees have also expressed their gratitude for willing to not only hire them, but train them to make them valued contributors to the workforce.

“If it wasn’t for Jenal, I really don’t know what I’d be doing with my life right now,” said 22-year-old Jacob Velez to Western Mass News. Velez is one of the former inmates employed by the company.  “It was hard, but I had ambition for changing my life and I met Jenal one morning and I asked him if he’d train me. He told me to show up at this place, this time and I did and so on.”