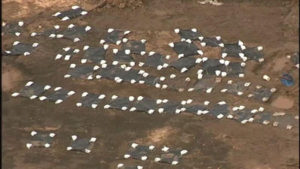 Today, most people see Sugar Land, Texas as an ideal place to live, a Houston suburb known more for its cul-de-sacs and shopping malls than anything else. However, this is built on top of a brutal history of plantations and prison camps that earned the city the name “Hellhole on The Brazos.” The Washington Post reports on one man’s journey to unearth a piece of this past.

For Reginald Moore, a Black man, it was about being a “voice for the voiceless” as he puts it. His interest in this history started after serving as a prison guard at one of Texas’s oldest prisons. Working off of a hunch, he believed the bodies of slaves and prisoners were still buried in the Sugar Land area, focusing in on site called the Imperial State Prison Farm. After `19 years of doing everything but digging out there himself, he finally saw a result. Archeologists discovered a plot of graves for 95 people, completely unmarked, with no indicator of any kind on the surface.

“This place was almost truly lost to history,” archaeologist Reign Clark of Goshawk Environmental Consulting told The Washington Post. Ironically, this was discovered by accident. A school was to be built at the former prison site at October, but thanks to Moore’s warnings, an archeologist was brought to survey the project. In February, a backhoe operator saw something that resembled a human bone, and the examination of the site began in earnest.

Clark is almost certain that the remains belong to Black prisoners, including former slaves. “Considering who owned the property and what the property was used for throughout time,” Clark said, “it would be 10,000 to 1 that it’s not the convict-lease cemetery. All skeletons examined to date have African American traits, with muscular builds and misshapen bones from repetitive wear, all pointing towards hard labor. The bodies are estimated to range from ages 14 to 70.