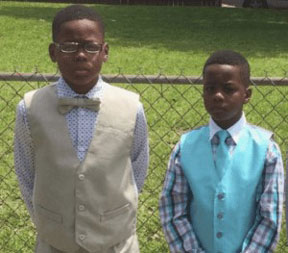 How two brothers are seeking to end homelessness in New Orleans

One organization making a huge impact in fighting homelessness is The Helping Lunch Box Project (THLBP) founded by two brothers, Kyllon and Derrell Martin Jr. These brothers, ages nine and 10 have been making bag lunches for the homeless in New Orleans, La. Their goal is to end hunger in their city.

According to a story in the Atlanta Black Star, “New Orleans has a 4 percent homeless rate, which is one of the country’s highest. And Katrina only added to the ever growing issue. The homeless population doubled, even though the city has launched efforts such as 10-year plan to curb the issue and tackle veterans’ homelessness.”

Before Hurricane Katrina devastated New Orleans, it was estimated that there were 6,000 homeless people in the area. However, after the catastrophe, that number swelled.

The Martins were one of the many families affected by the Category 5 storm. They re-settled back to New Orleans in 2010 after being displaced to Alabama in 2006. Once back, the brothers wanted to do something to help people who were without food. They began preparing bag lunches. On a couple of their outings, they went to a local bridge called the Crescent City Connection and met with groups of people under the bridge.

“Kristy Martin and husband Derrell Sr. bought the sandwich supplies, cookies, water and snacks for the lunch bags. The boys’ 13-year-old sister, Hermione, helped design and customize paper bags with inspirational messages. And the brothers and their mom made sandwiches. Everyone pitched in because everyone cared.”

Word began spreading and many people were donating to this effort.

Because of their passion and commitment to ending homelessness, THLBP was featured on WDSU on June 13. In addition to that, their profile made its way to Now This News which has since gone viral. Still gaining the attention of so many people, they have now partnered with the New Orleans based non-profit B.O.S.S. Youth Outreach Program.

“The partnership is already showing great results. Initially, the charity could serve only 50 people one day out of the month. Now, they can serve 140 people in two days. The B.O.S.S. Youth Outreach plans to get the brothers more donations, volunteers and a street team to help with food distribution. (Their father, Derrell Sr., is also associated with B.O.S.S.)”