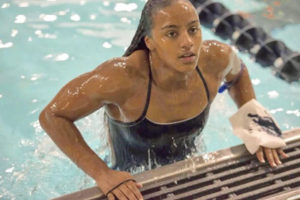 Latroya Pina is indeed a sensation when it comes to swimming. The Howard University student is grabbing everyone’s attention with her breaststrokes. She’s been consistent and has been so good at it that Bison has been tipped to have her represent Cape Verde during the 2020 Summer Olympics in Tokyo, Japan.

Swimming talent is evidently in Pina’s family. Along with her sister and brother, Jayla and Troy, the three will make history when they represent Cape Verde National Swim Team at the Confederation Africaine de Natation Championship Meet, an event set for September 10-16 in Algeria, reports the Howard Bison.

Pina, who was brought up in Massachusetts, is very happy about her achievements. With her siblings by her side, she’s confident that it’s all going to be good when the competition finally goes down in Algeria.

“It’s not far-fetched, three members of one family all going to the World Championships and the Olympic Games,” Pina told the Attleboro Sun Chronicle.

“We’re not just swimming for our colleges or schools, but for a nation so we want to do our best.”

Pina, who was named Howard Bison of the Month this past January, has scooped many awards. She won the women’s 100 breastroke and 200 individual medley in Howard’s Senior Night victory against Marymount. She was also part of the two relay teams that won against the Cardinals, taking home the 200 medley and 200 freestyle wins.

Pina, a senior biology major, has expressed confidence ahead of the Algeria competition and is also excited about representing the western African country.

“Cape Verde is trying to make swimming a big sport now, so it’s our responsibility to represent our country,” Pina said. “People in Cape Verde and all the Cape Verdeans in the U.S. will be looking up to us.”

Her school community is equally happy for her.

“To represent your country at the Olympic level is every swimmers’ dream,” said Howard Swimming & Diving Head Coach Nicholas Askew. Howard is currently the only HBCU that has both men and women swimming teams.

“We are excited for Latroya and have no doubt she will make Howard University and Cape Verde very proud.”

Pina’s mother, Maria Alfama, is considerably the most proud of Pina. Despite admitting that she’s not been so much into this kind of sport, Alfama said she’s been very supportive of her daughter.

“I don’t even know how to swim!” Alfama told the Sun Chronicle. “I was happy just watching. I’ve spent a lot of miles on the road, a lot of hours at pools with them. My life began when they got involved with sports and swimming. I was a super sports mom.”