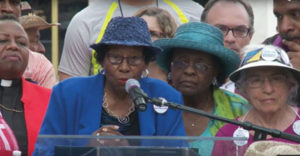 “Ms. Rosanell Eaton was the 97-year-old matriarch in our four-year successful court fight against voter suppression, from 2013 to 2016,” Rev. Dr. William Barber, the architect of the Forward Together Moral Monday Movement, and president of the North Carolina NAACP, said in a statement early Sunday.

Considered a Queen Mother and a leader in the struggle and movement for freedom, justice and equality, Rosanell Eaton proved a true matriarch to many civil rights leaders — especially when it came to the fight against voter suppression.

Eaton died on Saturday, Dec. 8, in her home in Louisburg, North Carolina.

“Ms. Rosanell Eaton was the 97-year-old matriarch in our four-year successful court fight against voter suppression, from 2013 to 2016,” Rev. Dr. William Barber, the architect of the Forward Together Moral Monday Movement, and president of the North Carolina NAACP, said in a statement early Sunday.

“While alive, she stayed focused on the prize of justice for all,” said Barber, who also serves as pastor of the Greenleaf Christian Church (Disciples of Christ) in Goldsboro and is president of Repairers of the Breach. “She once told me, ‘They think I’m gonna die before this case is over, but I’m not gonna die. I’m fed up and fired up.’”

“May her memory be for a blessing,” wrote Jody Drezner Alperin on her Twitter feed.

“May she rest in peace and rise in glory,” Anne Hartley wrote on Twitter.

In a tribute, The New York Times noted that Eaton was “an obscure civil rights pioneer in her younger years, who became a cause célèbre after President Barack Obama cited her courage in his response to a 2015 article in The New York Times Magazine about growing efforts to dismantle the protections of the Voting Rights Act of 1965.

“I was inspired to read about unsung American heroes like Rosanell Eaton in Jim Rutenberg’s ‘A Dream Undone: Inside the 50-year campaign to roll back the Voting Rights Act,’ ” Obama wrote in a letter to the editor. “I am where I am today only because men and women like Rosanell Eaton refused to accept anything less than a full measure of equality.”

As noted in the Times tribute, a year after the president’s letter, the Supreme Court, in a 4-4 vote, let stand a federal appeals court judgment upholding the lawsuit spearheaded by Ms. Eaton and other plaintiffs. The ruling struck down a North Carolina statute whose provisions “target African Americans with almost surgical precision” in what the court called an effort to depress Black turnout at the polls.

One of seven children born on a farm in North Carolina, Eaton attended segregated schools and used segregated bathrooms. However, she always counted as an advocate for voting rights.

The Times noted that in her first act of defiance, when she was 21, she went to the Franklin County Courthouse in Louisburg. Three white men confronted her there and demanded to know what she wanted.

“I’m here to register to vote,” she said.

They told her that she could register only if she could recite from memory the Preamble to the Constitution of the United States. It was a common ruse, disguised as a literacy test, to turn away Black voters. The valedictorian of her high school class, she complied without hesitation.

“We the People of the United States,” she said, “in Order to form a more perfect Union, establish Justice, insure domestic Tranquility, provide for the common defense, promote the general Welfare and secure the Blessings of Liberty to ourselves and our Posterity, do ordain and establish this Constitution for the United States of America.”

She registered and cast her ballot that year, 1942, becoming one of the state’s first Black voters since Reconstruction.

She voted in nearly every election thereafter. For more than 40 years, she was a county poll worker on election days, and a special registrar commissioner, helping some 4,000 people to register to vote.

In 1950, she joined the National Association for the Advancement of Colored People, and for more than 60 years participated in protests against racial discrimination, including the 1963 March on Washington for Jobs and Freedom.

During the civil rights turmoil of the 1960s, she and her family were threatened repeatedly by night riders, according to federal court papers.

She awoke several times to the crackle of burning crosses outside her home. Farm equipment was damaged one night, and bullets were fired into a shed and into the farmhouse. One struck just below her bedroom window.

“In her 90s, Mother Eaton was arrested and taken to jail. She marched in the streets and testified in the courts,” Barber said. “And, she even told Attorney General Eric Holder to tell his lawyers not to play with our case but to fight.”

The revolution will not be on a podcast

The revolution will not be on a podcast […]