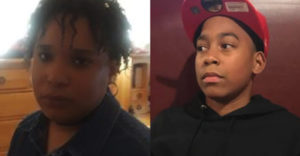 Minneapolis police have a located a 12-year-old girl who went missing last week.

Dejah McCondichie had last been seen sometime between 5 and 6 p.m. on Saturday, April 13, at her home on the 3200 block of 4th Street North. By Sunday afternoon, the police department posted an update with good news: Dejah had been found and is safe.

In Georgia, police said they’ve safely located 14-year-old Anastasia Foxworth who had been missing for more than 24 hours.

Could this series of good news updates mean that the tide is finally turning for Black girls who go missing? “It’s a step in the right direction, when you hear that authorities are finally having success, especially with Black girls,” said Yvonne Russ, a clinical psychologist. “But, there’s still too many missing and too many have been missing for too long.”

Organizations like Black and Missing But Not Forgotten, the Black and Missing Foundation (BAM) in Landover Hills, Maryland, and the National Center for Missing and Exploited Children (NCMEC) in Alexandria, Virginia, have struggled to shed light on the real emergency that is of the nation’s missing.

More than 424,066 girls of all races have gone missing since the beginning of 2018, according to NCMEC. More than half of that total are women and girls of color, according to BAM, which, like NCMEC, rely on statistics from the FBI.

Many said the media hasn’t done enough to shine the spotlight on the crisis of the missing – particularly Black girls.

“The majority of these children most likely come from marginalized communities, and are primarily low-income people of color,” said Dr. Ronnie A. Dunn, an interim chief diversity and inclusion officer and associate professor of urban studies at Cleveland State University.

“Given this nation’s racially stratified socioeconomic class hierarchy, as evidenced throughout institutions in America where poor children of color have worst outcomes on all quality of life indicators, their lives are devalued in relation to upper class white youth,” said Dunn, who has authored two books, “Race Profiling: Causes & Consequences,” and “Boycotts, Busing, & Beyond: The History & Implications of School Desegregation in the Urban North.”

“And even within that, while this nation espouses the valuing of children in general, this does not appear to be the reality as evidenced by the failure to act in the face of the onslaught of mass school shootings from Sandy Hook to Stoneman Douglas where the majority of those killed were middle class white youth,” Dunn said.

“Therefore, we see less media attention paid to missing children, particularly those of color,” he said.

Since the beginning of the month, numerous young girls have gone missing.

Officers say 20-year-old Carolyn Janiece Miller was last seen by family on Tuesday, April 9 when she left her Quintana Drive home in the Potomac area.

Police said Carolyn was driving her 2019, red Toyota Corolla with Maryland temporary tag: T889737 when she was last seen.

Carolyn is described by authorities as an African American female, 5-feet-tall and weighing 160 pounds. She has black hair and brown eyes. Her family has been unable to contact her since they last saw her leaving her home and are concerned for her welfare.

Anyone with information regarding Carolyn’s whereabouts are asked to call the Montgomery County Police non-emergency number at 301-279-8000.

In New Mexico, Albuquerque Police issued a Brittany Alert for 18-year-old Shara Pinder. According to police, Pinder went missing April 11, 2019, at the Albuquerque Transit Center. They said she was trying to catch a bus to the Westside Shelter and left by officers.

According to KRQE Media, police announced that the missing Albuquerque woman has been found.

Naturally, the missing doesn’t only include girls.

He was last seen wearing a red jogging suit, red hat, red sneakers, and has faded tattoos on his arms.

Authorities said they were last seen traveling west from Dakota’s home on Highway 404 toward I-55.

Anyone with information on the whereabouts of Dakota, Dallas, or the vehicle is asked to contact the Montgomery County Sheriff’s Department at (662) 858-0019.

The ballot or the booty

The ballot or the booty […]

In Black and White: Key Findings of American’s View on Race in 2019

Justice is not blind

Justice is not blind
[…]