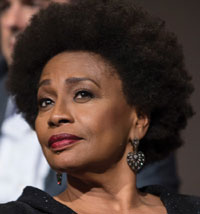 60-year-old Jenifer Lewis is telling it like it is in her new book, The Mother Of Black Hollywood (if ever there was a title that was true, this one is it).

The Blackish actress writes in her memoir about living un-diagnosed with bipolar disorder and a sex addiction she discovered while on Broadway.

In an excerpt exclusively landed by the folks at People, Lewis writes, “Performing on Broadway was a rush. The applause coming over the foot-lights was like a tsunami in slow motion. The crash after the show, I assure you, is just as intense. Let’s just say that post show I had a sort of habit of sex serving as a night cap. I was Cleopatra, Pam Grier, Marilyn Monroe, and Jezebel rolled into one. For me, nothing could extend the thrill of a standing ovation like great sex with a gorgeous guy.”

In 1989 she’d begin to self-medicate with alcohol and sex to treat her bipolar disorder. She eventually sought help from a therapist.

“Had she said, ‘you’re crazy,’ I would have agreed. I had been crazy all my life. When she said, ‘mental illness,’ I thought, ‘b—-, you crazy.’ I associated mental illness with people who couldn’t function, with straitjackets. I certainly knew what a depressive mood was, but this other ‘manic’ part was new. When Rachel explained the details, I gasped. You mean, there is a name for describing why I talk fast and walk fast and rage, create drama, and speed when I drive a car? Compulsive, you say? The doodling, the braiding and unbraiding my hair? The arguing with people and storming off ? Kicking s—, throwing s—? Yeah, okay, I guess all of that describes me.”

Lewis’ book is available for pre-order here. And just in case you need some convincing. Brandy and actress Roz Ryan are here to help.