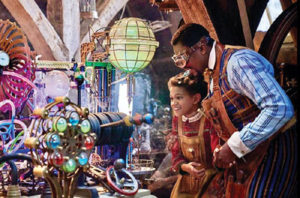 What a nice surprise. David E. Talbert, a playwright (Love in the Nick of Tyme) turned filmmaker (First Sunday), lets his musicality fly and creates a viable family Christmas movie that’s as strong as any Disney film.

Inspired by musicals like Chitty Chitty Bang Bang, Dr. Dolittle and Willy Wonka & the Chocolate Factory and motivated by his son’s desire to see enchanting movies with people who looked like him, Talbert created this vibrant fantasy/family/musical. Originally targeted to be a theater piece, it has finally evolved into a live-action, CGI and animated feature film

All is good in the fictional village of Cobbleton, where the very bright inventor Jeronicus (Justin Cornwell, TV’s Training Day) is the toast of the town and proprietor of its treasured toy store, which boasts his magical devices. He is loved by his wife Joanne (Sharon Rose), adored by daughter Jessica (Diaana Babnicova) and admired by the locals. However, his apprentice Gustafson (Miles Barrow) is a bit jealous of his success. And when one of Jeronicus’ inventions, a mini robotic man toy named “Don Juan Diego” (Ricky Martin), tempts the young man into a diabolical scheme, trouble ensues. 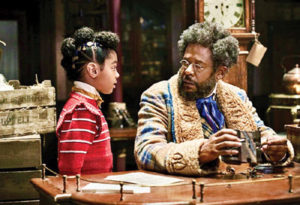 Many years go by and the much older Jeronicus (Forest Whitaker) is a shadow of himself. Depressed, lethargic, lonely, no confidence and washed up in a dusty old toy store now a pawn shop. Meanwhile, elsewhere, the adult Gustafson (Keegan-Michael Key) thrives—he is famous for inventions he calls his own. But are they? Darkness shrouds the elderly Jeronicus, until one day he is visited by a little girl named Journey (Madalen Mills). Could she be the secret to his revival?

Within first five minutes the most noticeable element of this slick production is the supreme coordination of the singers, dancers, extras, and sets. Each musical piece is its own wonderland, perfectly sung by lead performers and impressively choreographed (Australian choreographer Ashley Wallen, The Greatest Showman) against backdrops equal to those in a Tony Award-winning show.

It helps that Talbert and the film’s producers have assembled an illustrious tech team: The musical score by composer John Debney (The Jungle Book) is enchanting, the footage by cinematographer Remi Adefarasin (Elizabeth) glows and all the sets from the store to the village streets are artfully crafted by production designer Gavin Bocquet (Star Wars: Episode III – Revenge of the Sith) and set designer Rob Cameron (Game of Thrones). Snazzy Victorian costumes by Michael Wilkinson (Aladdin) and seamless special effects from visual effects supervisor Brad Parker add to the euphoric mix. 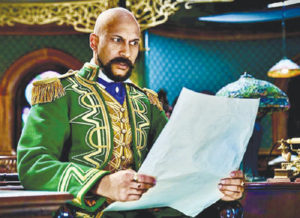 Talbert skillfully blends the drama, music, animation, and CGI into a charming experience. Even when the script gets burdened a bit by its girth (lots of characters and a bit too many life lessons), attention spans will snap back every time a musical number pops up. Talbert pulls great performances from the cast; stages scenes astutely and imbues the entire production with a vibrant spirit that is sustained up to a satisfying ending.

The gimmick of a precious book of inventions creates an inciting incident that pulls the main characters away from happy land into drama. The devilishness of the Don Juan Diego character provides an evil antagonist angle that the script needed. As the incorrigible Don Juan coaxes Gustafson, like the devil tempting a wretched soul, he says: “It isn’t stealing—when you borrow indefinitely.” Yeah, uh huh.

A special nod must go to the overly flirtatious character Ms. Johnston, played with vigor by Lisa Davina Phillip, who sings like a Showtime at the Apollo champion. She steals the moment. Whitaker’s very nuanced performance and his vulnerable singing will remind audiences that he is a consummate and malleable actor. Key is decent. Anika Noni Rose (Dreamgirls) as the older Jessica sings to the rafters and deserved more screen time. Young Kieron L. Dyer as the older Jeronicus’ apprentice friend is delightful and the perfect mate for the winsome Madalen Mills.

If the production seems a bit long winded, it is because it takes 2h 2 min to unwind. Sharper, tougher editing would make what is on view even more child friendly. That imperfection is counterbalanced by the film’s sage themes: the moral will triumph over the immoral and finding self-belief in the bleakest times is a must.

The wise words of Ms. Johnston sum up Jeronicus’ perilous sojourn: “The magic isn’t in what you lost, but in what you have.” Indeed.