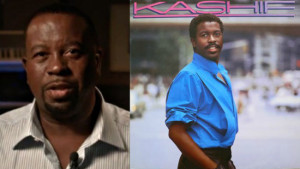 This is such a tragedy. R&B singer Kashif Saleem sadly died on Sept. 25 at the young age of 59. He was found dead at his home in Playa del Rey, California. He will be so missed.

Kashif was found dead by a neighbor on Sept. 25, his family confirmed to the Los Angeles Times. A cause of death has not been officially released yet. Kashif was born Michael Jones in New York on Dec. 26, 1956, and raised in foster homes, according to The Washington Post. He changed his name to Kashif Saleem after studying Islam.

Pam and Mike Stitt, a couple Kashif unofficially adopted as his brother and sister, are devastated over his death.  “We are saddened by the passing of our brother,” they told The Washington Post. “We ask for your thoughts and prayers to be with us at this time.”

Kashif was a man of many talents. Over the course of his career, he was a the singer, songwriter and producer. He notably produced Whitney’s Houston’s breakout hit “You Give Good Love” in 1985. The song became Whitney’s first No. 1 R&B record. The 6-time Grammy nominated Kashif also produced songs for produced Evelyn “Champagne” King, Kenny G., Mariah Carey and Janet Jackson.

Some of his biggest R&B hits included “I Just Gotta Have You (Lover Turn Me On),”Personality” and “Baby Don’t Break Your Baby’s Heart.” His best known song was a 1978 remake of the Mother’s Finest song “Love Changes.” He recorded a duet version with Meli’sa Morgan in 1987. Kashif had released 7 albums at the time of his death.

He also wrote a book, Everything You’d Better Know About The Record Business, in 1996. He reportedly conducted more than 200 interviews for a 10-part documentary titled The History of R&B Music and Its Influence On World Culture before his sudden death.