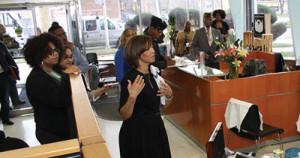 Staff and customers at the Illinois Service Federal Savings & Loan Association in Chicago.

Illinois Service Federal Savings & Loan Association (IsfBank) is the last Black-owned bank in Chicago, and the city wants it to stay afloat. That’s why the city of Chicago has just deposited $20 million into the bank to ensure the bank will be around to continue to support underserved communities.

Chicago recognizes the important role that IsfBank plays in the community by serving the needs of small minority-owned businesses and residents. What began as a grassroots campaign called #BankBlack, encouraging consumers to put their money in Black-owned banks, has now grown to include institutions and municipalities, all sup-porting efforts to keep the last Black-owned bank in business.

All gone, but one

Over the past 25 years, Black-owned banks nationwide have slowly disappeared from more than 100 to just a few dozen. In Chicago alone, 10 Black-owned lenders have closed in the past few years.

The last one to go was the Seaway Bank & Trust, which was closed by the FDIC and sold earlier this year. That means that IsfBank is literally the last remaining Black-owned bank in the Chicago area.

The continued existence of Black-owned banks is critical in serving the needs of minorities. According to research, Black and Hispanic borrowers still face tough challenges when it comes to getting loans to buy homes, and homes are the most important factor in building wealth in the U.S. IsfBank, founded in 1934, faced the risk of closing in 2015 due to not enough capital, but it survived.

The recent deposit from the City of Chicago was a huge boost to ensure the bank’s continued existence. According to Phillip Beckham, executive director of Mid-South Business Association and Resource Center, the deposit will enable them to support and develop homes, businesses and neighborhoods where Black people live.

On May 14, Florida Gov. Ron DeSantis announced that Russian hackers gained access to voter databases in two counties in the state before the 2016 presidential election. DeSantis added that the hackers didn’t manipulate any data and the results of the election were not changed. He provided no proof that was the case. […]

How hospitals are failing Black mothers

How hospitals are failing Black mothers