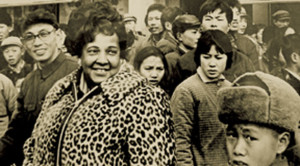 WASHINGTON, D.C.  (NNPA) – When James McGrath Morris set out to write his latest book, he didn’t know how timely it would be. When Eye on the Struggle: Ethel Payne, The First Lady of the Black Press hit shelves, Essence magazine had just released its Black Lives Matter issue. The Justice Department had closed its investigation into Trayvon Martin’s murder, with no charges. Mainstream media was scramling to report on police violence and systemic racial ills, and Black Americans took much of this coverage to task for its racist, shallow, or negligent portrayals.

“We get these events filtered through the mainstream media. The mainstream media is still very white. I don’t mean they don’t hire people of color…  it’s a perspective issue. The fact the media had a debate over the use of the word ‘terrorist’ [for Dylann Roof] in South Carolina is an indication,” said Morris.

“So what I found is that Ethel Payne’s story, her perspective, her form of journalism 50 years ago, still has relevance today. Because while we may have made leaps in terms of segregation…the dominant filter to-day remains a white-controlled media.”

Ethel Payne was poking holes in that filter at a time when the White majority fought against the tide of sustained agitation to secure civil and human rights for all. At the Chicago Defender, Payne was the eyes and ears of the Civil Rights Movement, reporting from its front lines in the Deep South, press conferences at the White House, and iconic rulings at the Supreme Court. In 1953, she became the third Black person to join the White House Press Corps, and was known for persistently prodding President Dwight D. Eisenhower on Jim Crow laws and desegregation efforts.

In the ’50s and ’60s, she jetted around the globe for international stories such as Black soldiers in Vietnam and the Nigerian Civil War, becoming the first Black woman to be a fulltime foreign correspondent. Yet, she always returned for on-the-ground coverage of moments that would become his-tory, such the start of the Montgomery bus boycott and the desegregation of Little Rock, Ark.’s Central High School.

In 1972, Payne joined CBS and became the first Black woman commentator at a major network. In 2002, she was memorialized on a postage stamp.

With 40 years of tireless journalism and a legacy honed at a Black-owned newspaper, Payne earned her reputation as the “First Lady of the Black Press.”

“When The New York Times or The Washington Post would report on the pas-sage of the Civil Rights Act of ‘64 or the Voting Rights Act of ‘65, the tone of the articles was that these were munificent gifts being given to a disenfranchised people,” Morris said.

“Whereas, if you opened up the Afro American or the Pittsburgh Courier or Chicago Defender, what you were seeing was coverage of the fact that these were victories, hard-won victories by people who laid their lives on the line. Nothing was being given. In fact, [Payne’s] coverage often highlighted the inadequacies of these pieces of legislation.”

In the early ‘70s, Ernest Green, a member of the Little Rock Nine, made a quip to Payne about what desegregation would do to such coverage.

“He said to her that the successes she and others made with the Civil Rights Movement were going to put the Black Press out of business. Obviously, that was too strong of a determination, because there’s still a viable Black press, but his bigger point was right in that the White media was going to raid the Black press for the best reporters, offer them jobs at much higher pay. And if you’re raising a family, what are you going to do?” Morris recounted.

“Many of the best reporters were lured away. But also, importantly, the economic basis of the Black press was undercut. Because when the White press refused to cover Black communities – high school tournaments, weddings, graduations, obituaries – there was an economic reason for [Black papers].”

Further, another side effect of integration and the Civil Rights Movement is that subsequent generations do not get a thorough and true education on Black history, or how the Movement happened. Payne said as much at a speaking engagement at her childhood church, [Greater] St. John A.ME. Church.

“She told her audience that, ours was a generation who laid their lives on the line to send our kids to college, but in doing so forgot to tell them our story. I like to expand that…we tend to teach the Civil Rights Movement focused on its leadership,” he said.

“Ethel Payne was part of the lesser-known group, she’s in the second, third tier of the Civil Rights Movement. I see younger people…waiting for somebody else to come and lead them. But these movements come from everyday people.”

Morris, a former journalist who also taught high school history for a decade, has been writing biographies and narrative nonfiction for many years. In searching for a new subject, he stumbled upon Payne’s name, which was unknown to him at the time. With a little more research, he was startled to find that few historians had taken a deep look at her contributions to journalism and the Civil Rights Movement.

“For me, [this book] has been the greatest experience of my life. It’s been really an honor, for me as an author, to do a book that matters,” Morris said. “I’ve had the privilege of learning that race really matters, but I didn’t know it because I was able to stay removed from it. That, to my mind, is Ethel Payne’s gift to me.”

Payne’s personal papers and journals are housed in Washington, D.C. with the Library of Congress’ Manuscript Division and the Moorland-Spingarn Research Center at Howard University, and in New York at the Schomburg Center for Research in Black Culture.

Eye on the Struggle: Ethel Payne, The First Lady of the Black Press is available at major book retailers. Signed copies can be purchased via www.jamesmcgrathmorris.com/eyeonstruggle.html.

“She went as a reporter to the front lines of the Civil Rights Movement…to report back to African Americans…to activate them,” Morris said. “The more people learn about Ethel Payne, I think they too will feel a sense of power.”