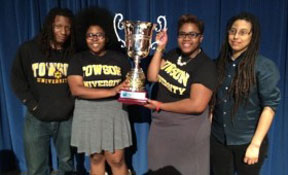 I still get surprised when I read a write-up featuring an African-American first. The realization that there still exists a lengthy list of areas where African-Americans aren’t represented is a constant reminder that there is still work to be done. Two Towson University students recently crossed one more thing off that list as the First Black women to win a national debate championship tournament.

Ameena Ruffin and Korey Johnson almost missed this opportunity when Towson officials initially denied the Towson debate team from participating in the Harvard University tournament. The two women and their Towson debate team put their debate skills to work causing the university acquiesce and let the team participate.

From the Baltimore Sun:

Arguing their way to the top

Johnson, an 18-year-old sophomore, called the win “surreal.” The team spent untold hours poring over books, articles and other publications to craft their arguments, then took more time to practice their delivery strategies, she said.

I’m sure Towson University is glad they let Ruffin, Johnson and their team competes in the Cross Examination Debate Association National Championship (CEDA). The Towson students beat 170 other teams to win what’s coined the “Super Bowl” of debate championships. Johnson and Ruffin’s  win is attributed to their visionary views rather than focusing on negative present day circumstances  of the societal challenges of police brutality, the prison system and poverty issues faced by Black people in the U.S. This milestone win has placed the pair in the top 16 debate teams in the country; individually Ruffin placed second and Johnson placed forth.

Listen to the interview The Art of Argument on WYPR-FM where the duo discussed their preparation for the CEDA national championship competition.