Still unnerved by the deadly mass shootings in a supermarket in Buffalo, New York, and at a school in Uvalde, Texas, in particular, what seemed like millions of people this weekend took to America’s streets as part of the March For Our Lives protests that sprinkled the country in an effort to compel Congress to finally take decisive steps toward real gun control.

These are some of the Blackest moments from Saturday’s national protests against the scourge of gun violence in which white supremacy has many times been a major motivating factor.

MORE: The History Of America’s Sick And Twisted Infatuation With Guns

The March For Our Lives, which started in 2018 as a response to the Parkland school shooting, now resonates with an even larger swath of Americans as gun violence has become nearly inescapable. Whether it is in the confines of a church or school, which are supposed to be safe spaces, or on public transportation, or just in the streets or homes of Anywhere, USA, gun violence has shown resoundingly that it does not discriminate when and where it happens or whom it happens to.

Therefore, protesters say it’s up to the U.S. government to take charge and institute sensible gun legislation that doesn’t rile up Second Amendment proponents who believe their guns will be taken away. At the same time, folks on the opposite end of the spectrum whose lives have been upended by gun violence are demanding stricter gun policies. In the past, those opposite forces have collided and produced no meaningful change for either of them.

That was the underlying context of the March For Our Lives on Saturday, when throngs of protesters carried signs reading messages to lawmakers like, “Protect Our Kids, Not Guns.”

Among the protesters was a national contingency of Black people who have also been affected by gun violence. They came out and shared their stories of loss and survival, a combination that they say has steeled their resolve for common-sense gun legislation following what seems like a recent neverending spate of mass shootings.

Those same people affected by gun violence have now become activists in their own right in an effort to prevent the types of firearm-involved tragedies that have forever changed their lives.

Other notable cities where March For Our Lives protests took place include Buffalo, Orlando, Florida, Kansas City, Missouri, Raleigh, North Carolina, and many, many others.

Keep reading to find some of the Blackest moments from the 2022 March For Our Lives. 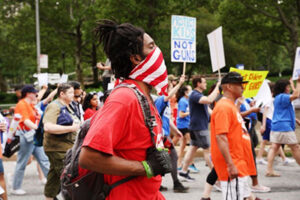 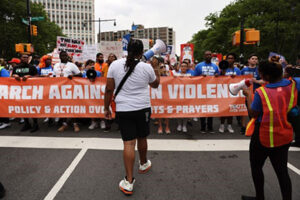 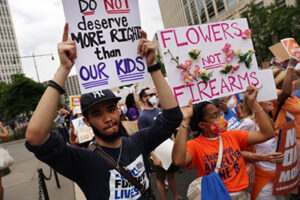 MARCH FOR OUR LIVES: THE MARCH FOR CHANGE

The student group March for Our Lives was founded by David Hogg, Emma Gonzalez, Jaclyn Corin as well as several other students of the 2018 Stoneman Douglas tragedy. Since its conception, the group has rallied hundreds of thousands around the country with the utmost goal to fight for tighter gun laws. Their efforts included a nationality televised march in Washington, D.C, that landed on the cover of Time Magazine and received the international Children’s Peace Prize from Archbishop Desmond Tutu. […]