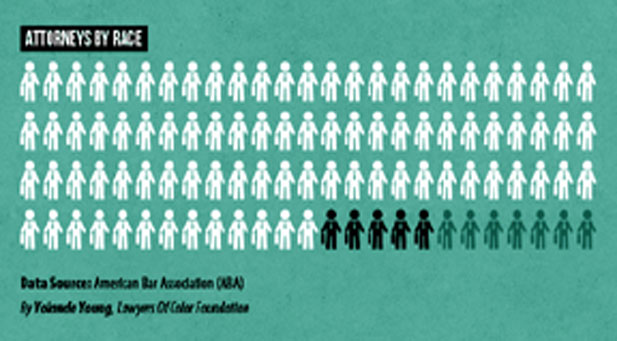 Marilyn Mosby is the latest example of why Black lawyers matter

By Yolanda Young, Special to the NNPA from Lawyers of Color

(This article is the second in a series sponsored by The Cochran Firm, lawyers for the parents of John Crawford III, who was shot and killed by police near Dayton, Ohio, in September.)

In response to last year’s killing of Michael Brown, La June Montgomery Tabron, who heads one of the nation’s largest philanthropies, W.K. Kellogg Foundation, issued a statement in which she astutely noted that deaths like Brown’s “demonstrate that the law enforcement and justice systems in our nation are broken.”

An often-cited criticism: The police force is too white. Well, the legal profession is even whiter and the job much more subjective. Consider the role prosecutorial discretion plays in the administration of criminal justice. Insufficient resources and an overflowing criminal docket require prosecutors act in a role the public views as judge and jury. Without objective criteria, prosecutors decide whom to charge and what those charges will be. They alone decide whether to offer a plea bargain or proceed to trial. They are usually allowed to exercise this power with impunity and outside of public view, but in the last year, the curtain has been pulled back.

In a rash of high profile police killings of unarmed Black males — John Crawford III, Michael Brown, Eric Garner, Tamir Rice, and Walter Scott — white prosecutors appeared reluctant to vigorously pursue indictments, even when facts were highly disputed. Reports by Talking Points Memo, The Wall Street Journal and The Washington Post conclude that almost none of the police officers who kill roughly 1,000 people each year is ever charged.

By contrast, Marilyn Mosby joins a strong block of Black prosecutors, including U.S. Attorney General Loretta Lynch and her predecessor Eric Holder, who are able to respect and support law enforcement without ignoring the complexities of police power. Mosby is Baltimore City state’s attorney. As Brooklyn’s district attorney, Kenneth Thompson, put it in addressing an indictment against a police officer who shot an unarmed man in a stairwell:  “Acts of police brutality are not only crimes against the individual victim but also are attacks on the communities in which they occur…The people of Brooklyn have voted for their District Attorney to keep them safe from all crimes, including those of police brutality.” Thompson is African American.

White prosecutorial restraint does not extend to Black defendants

While unconscious-bias training and stricter rules might improve the situation, the best way to stem discrimination is to have more Black faces in the room. This was the sentiment shared by Black prosecutors in a2010 district attorney roundtable discussion. As former National Black Prosecutors Association president Bruce Brown put it, “When you have African-Americans in the room making decisions, challenging decisions, folks are forced to look at the motives behind what they’re doing, and it’s not until all those motives are questioned that we make sure that our system is working, not only effectively, but also efficiently and fairly for everyone involved.”

There are no Black attorneys in Ferguson

How we get those Black attorneys in the room is a difficult question that demands an answer. Just ask the residents of Ferguson, Mo. The public was shocked to learn that despite its Black majority, only 6 percent of the police force is Black. At the time of Brown’s killing, the number of Black attorneys in Ferguson was zero, according to the Missouri bar, which listed only four White attorneys for the city’s 14,000 Black residents, who were issued 92 percent of the city’s warrants and received 95 percent of two-day or more jail sentences.

The Justice Department’s lengthy March report on Ferguson linked a lack of legal representation with police misconduct. In blistering detail, the report demonstrated how the police and courts, whose employees have a proclivity for racist jokes and discriminatory behavior, employ tactics that include harassment involving traffic stops, court appearances, high fines, and the threat of jail to extort money from Black residents. By disproportionately targeting African Americans and routinely violating their constitutional rights, Ferguson created the predatory environment in which a jaywalking stop by police officer Darren Wilson could escalate to the homicide of Michael Brown.

Ferguson residents are subjected to a modern-day debtors’ prison, according to a recent lawsuit filed by ArchCity Defenders, which found that Ferguson’s poor residents provide the second-largest source of revenue for the city, $2,635,400 in 2013 as Ferguson Municipal Court disposed of 24,532 warrants and 12,018 cases, “or about 3 warrants and 1.5 cases per household.”

But why do we need Black lawyers?

According to the American Bar Association, 88 percent of all lawyers are white and only 4.8 percent are Black, so for each of the 60,864 Black lawyers there are 686 Black citizens needing assistance compared with only 282 White citizens for each of the 1,117,118 white lawyers.

In actuality, the disparity is of course much greater because African Americans are disproportionately entangled in the criminal justice system — one in 15 Black men is incarcerated compared to one in 106 White men.

While there are white lawyers, like the founders of ArchCity Defenders, who are committed to social justice reform and are conscientious, they comprise a very small fraction of practicing attorneys. Moreover, racial bias is a problem too great to be addressed by even the most ardent groups of well-meaning equal justice advocates.

Criminal cases aren’t the only ones in which Black people are disadvantaged. Several studies reveal that African Americans suffer worse legal outcomes than their white counterparts in civil cases, even when controlling for income and educational levels. While the researchers have no way of knowing whether the disparate treatment is intentional, the proof of white attorney bias exists across many legal practice areas.

In the study, “Race, Attorney Influence, and Bankruptcy Chapter Choice,” researchers found that even after controlling for financial, demographic, and other factors, lawyers, in part because of biases, were disproportionately steering blacks into Chapter 13 (the more onerous and costly form of consumer bankruptcy). Attorneys recommend Chapter 13 to Black clients twice as often as they do White clients, even when clients prefer the less onerous Chapter 7.

Even the bench does not appear exempt from such biases. In “Myth of the Color-Blind Judge,” Pat K. Chew, a professor at the University of Pittsburgh School of Law, and Robert E. Kelley, a professor at Carnegie Mellon University Tepper School of Business, performed an empirical study of federal government harassment cases spanning 20 years and concluded:

According to the American Bar Association, in state trial courts, where the vast majority of cases are handled, only 7 percent of judges are Black.

Judicial homogeneity naturally leads to a lack of diversity among law clerks, who can have enormous influence with their judges. In 1998, USA Today caused an uproar among social justice advocates and members of the Congressional Black Caucus when its investigation revealed that of the 394 law clerks hired by the nine sitting Supreme Court Justices, only seven had been African American. Then sitting justices William Rehnquist, Anthony Kennedy, Antonin Scalia, and David Souter had never hired a Black clerk.

The NAACP is Irrelevant

The NAACP is Irrelevant
[…]

Do children all need to succeed the same way?

It’s hard to be what you can’t see