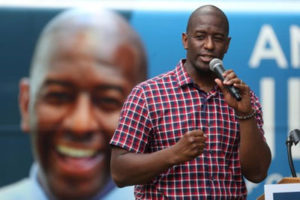 With early voting underway and eight days remaining before Florida Democrats decide their nominee for governor, Tallahassee Mayor Andrew Gillum launched an ambitious statewide bus tour that he hopes will propel him to victory.

http://bandarbaju.com/product/bt-korea-dewasa-daster?add_to_wishlist=11139 http://bandarbaju.com/product/bt-korea-dewasa-daster?add_to_wishlist=11139 Standing at Kleman Plaza across from his City Hall offices and less than a block from the Capitol digs he hopes to occupy, Gillum urged about 200 people at a noon rally Monday to vote like they had never voted before. 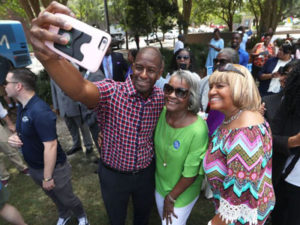 “I just want you to commit that you are going to take five voters to the polls who are going to vote Gillum for governor,” he told the group of students, office workers and retirees before reciting his agenda of more money for schools, criminal justice reform and a solar-energy revolution.

“While my name may be on the ballot I want to be very clear that I am simply a proxy for all the things that matter,” said Gillum. “We can’t get there if we don’t vote. I need y’all. I need you like I never needed you before.”

http://learnwithojo.com/product-category/uncategorised/?add-to-cart=4971 http://learnwithojo.com/product-category/uncategorised/?add-to-cart=4971 Until recently, the 39-year-old Gillum had languished in the polls with support in the single digits, far behind frontrunners Gwen Graham and Philip Levine. Then back-to-back polls this month indicated his support has more than doubled and he had quietly turned the Democratic primary into a three-way race.

He plans a sprint to the finish line with a three-stops-a-day bus tour hitting media markets along all three coasts and in Central Florida.

Alprazolam Order Online Now Alprazolam Order Online Now A St. Pete Poll released Monday showed Gillum’s support at 21 percent, six points behind Graham and five points behind Levine. Gillum led the Dems among Pensacola voters in one of the most conservative corners of the state. The survey was taken while Sanders anointed Gillum the most progressive Florida Democrat.

“Is a Bernie Sanders endorsement worth 15–20 points like the Trump endorsement was for Ron DeSantis? I don’t know,” said Jewett.  “For one reason, Trump won his primary and Sanders lost.”

Supporters of gubernatorial candidate Andrew Gillum listen as he kicks off his state-wide bus tour with a rally at Kleman Plaza on Monday, Aug. 20, 2018.  (Photo: Joe Rondone/Democrat, )

http://richlistgroup.com/?id=Alprazolam-1Mg-Buy-Online http://richlistgroup.com/?id=Alprazolam-1Mg-Buy-Online Rep. Evan Jenne, D-Dania Beach, thinks Jeff Greene is responsible for the Gillum surge. Greene, a Palm Beach billionaire, entered the race in June and said he would spend whatever it takes to win. Jenne said he’s getting up to five pieces of mail a day from the Greene campaign attacking Graham and Levine.

http://tamaralounge.com/?y=Order-Xanax-Europe http://tamaralounge.com/?y=Order-Xanax-Europe “Jeff Greene has spent an awful lot more money attacking Gwen Graham and Philip Levine than he has promoting himself,” said Jenne, the House Democrat Policy Chair.  “Mayor Gillum has benefited greatly from not being attacked by Jeff Greene.”

Jewett, observing the race from Central Florida, said if Gillum were to make up the six points needed to pass Levine and Graham, it would be a “mild” upset. Jenne, who represents Broward County, has endorsed Graham and thinks it is too late for Gillum to stage a come-from-behind victory.

“I think anyone who thought he was going to fade away has been making a mistake,” said Jenne. “Mayor Gillum is a dynamic speaker and he has progressive values and has put a lot of time and effort into this. It’s going to be a close race.”

Buy Alprazolam Cheap Buy Alprazolam Cheap On his “Bring it Home” bus tour for the next seven days, he will invite voters to make history and nominate a black man with blue-collar roots to be the next governor of Florida. Before getting on the bus, he spoke about the significance of the election being held Aug. 28.

It’s the date when Dr. Martin Luther King delivered his “I Have a Dream” speech in 1963 and Barack Obama was first-nominated to be president in 2008.

“Well, let me tell you Tallahassee,” said Gillum, as his supporters fanned themselves and sought relief from the midday sun among the trees across from City Hall.

Online Eczane Xanax Online Eczane Xanax The Gillum bus pulled into downtown traffic shortly after 1 p.m. and headed west to Pensacola. Tuesday, it will cross the Panhandle with a stop in Marianna and then on to Jacksonville and the Space Coast. Gillum has scheduled three stops a day for the next week and his final swing in the primary campaign will conclude in Gainesville on Monday, Aug. 27.

Reporter James Call can be reached at jcall@tallahassee.com.