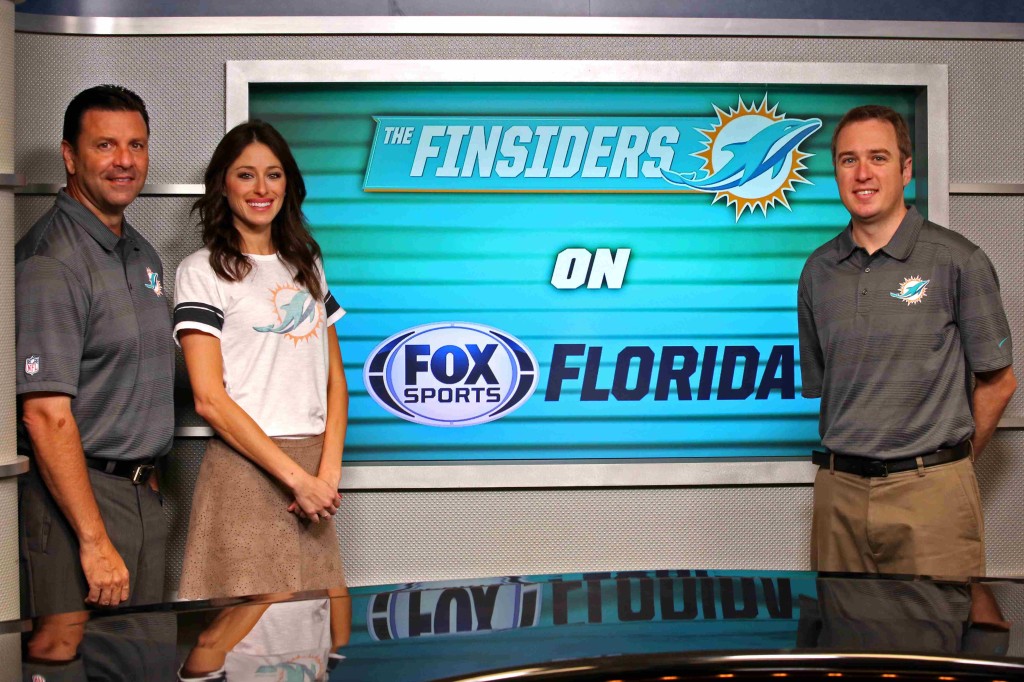 Miami, FL – With the 2013 regular season starting this week, Miami Dolphins fans looking to have more interactive and unique content for their favorite team will have the opportunity to do so when The FINSIDERS makes its television premiere,September 9, 2013 on FOX Sports Florida. The show will air every weekday afternoon from 5-6 p.m., 52 weeks during the year.

“This partnership represents another step in Steve Ross’ commitment to providing unparalleled access to the Miami Dolphins, as well as delivering that access to fans wherever, whenever, and however our fans would like to consume it,” said Jim Rushton, Miami Dolphins Chief Revenue Officer. “This will provide robust platforms for our sponsor and media partners to connect with our passionate fan base in a meaningful way.”

The FINSIDERS, an all access pass to the Miami Dolphins is produced live from their studio inside the Doctors Hospital Training Facility at Nova Southeastern University in Davie, Florida.

“We are delighted to expand our partnership with the Miami Dolphins and truly believe The FINSIDERS show is going to be well received by viewers and fans throughout South Florida,” said Steve Tello, Senior Vice President and General Manager, FOX Sports Florida. “From Head Coach Joe Philbin on Mondays, to extraordinary player access throughout the week, we are confident this will become year-round appointment viewing for all Dolphins fans.”

In their fourth season, The FINSIDERS can be heard from 5-7 p.m. on WINZ 940 AM in Miami/Ft. Lauderdale and 1230 WBZT in West Palm Beach. Additionally, the show will be streamed live (audio only) on Dolphins.com and on Dolphins APPS. The FINSIDERS is a socially interactive show. Fans can chat live with the show on Dolphins.com, call in at 1-8-555-GO-FINS or text 347347. The conversations with the fans are moderated by Dolphins reporter Tristin Jones. In 2013, The FINSIDERS will add social media to the television experience as well. Fans will be able to tweet to the screen and take part in the conversation from their living rooms.

The FINSIDERS brand also includes The FINSIDERS Playbook (Gameday program), The FINSIDERS Final Drive (Weekly television recap of interviews and access) and The FINSIDERS Pregame Show and Halftime Report on the Dolphins Radio Network. The FINSIDERS, as well as other Miami Dolphins Media Brands are made up of Television, Radio, Print, Social Media, Mobile, Digital, and In-Stadium Programming Year Round.

The Miami Dolphins Create the RISE Tailgate to Inspire Change

Miami Dolphins owner Stephen Ross created the RISE tailgate in order to help drive social progress and advance in race relations.  These days, it’s a scary environment for people to live in, especially if you’re […]

Sometimes less really is more. The University of Miami came into the season with a lot less talent because of losing seven players to the NFL. The program also got to see the departure of […]