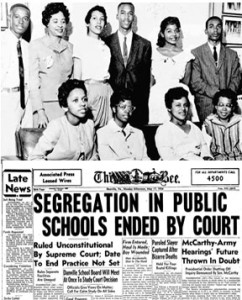 The Little Rock Nine pictured with Daisy Bates, the president of the Arkansas NAACP.

1876—Meharry Medical College, the first Black medical school in the U.S., founded by the Freedman’s Aid Society of the Methodist Episcopal Church.

1881—Spelman College, the first college for Black women in the U.S., founded by Sophia B. Packard and Harriet E. Giles.

1881—Booker T. Washington founds the Tuskegee Normal and Industrial Institute in Alabama. The school became one of the leading schools of higher learning for African Americans, and stressed the practical application of knowledge. In 1896, George Washington Carver began teaching there as director of the department of agricultural research, gaining an international reputation for his agricultural advances.

1954—In the landmark case Brown v. Board of Education of Topeka, Kans., the Supreme Court rules unanimously that segregation in public schools in unconstitutional.

first Black student to enroll at the University of Mississippi; on the day he enters the university, he is escorted by U.S. marshals.

1963—Despite Governor George Wallace physically blocking their way, Vivian Malone and James Hood register for classes at the University of Alabama.

2003—In Grutter v. Bollinger, the Supreme Court (5-4) upholds the University of Michigan Law School’s affirmative action policy, ruling that race can be one of many factors considered by colleges when selecting their students because it furthers “a compelling interest in obtaining the educational benefits that flow from a diverse student body.”

2007—The Journal of Blacks in Higher Education surveyed the nation’s highest-ranked research universities, the most selective liberal arts colleges, and the 50 flagship state universities to determine their levels of Black faculty. Mount Holyoke College had the highest percentage of Black faculty of any of the 100 colleges and universities surveyed, with 9.7 percent.

According to the U.S. Dept. of Education, the 2007 national average was 5.4 percent.

Read Our History in the pages of the Westside Gazette

By Stacy M. Brown, NNPA Newswire Correspondent @StacyBrownMedia With one of pop music’s most profound voices performing during a ceremony that included a video tribute featuring tributes from a mayor, a congressman, a school superintendent […]