World War II veteran Alphonso “Al” Giles, who would have turned 100 this past May 2, will receive belated military funeral honors in the large chapel of the James C. Boyd Funeral Home on Monday, November 14.

The US Army’s 3 p.m. Military Honors Ceremony will include speakers highlighting Giles’s service in the Pacific Theater of Operations during WWII.

“During his final years, Dad expressed a desire for his funeral to include a military honor guard and bugler to play ‘Taps,’” said Giles’s daughter, Yvette. “These honors were not included in his funeral rites, so we are fulfilling this final wish during his centennial year.”

The ceremony will feature clips from the video, Alphonso Giles: Story from an American Hero, exploring Giles’ most memorable military experiences.  The public is invited to attend.

Corporal Giles served as an Army Water Purification Specialist from 1942 to 1946. He first used these skills “in the sweltering jungles of New Guinea near Australia,” Giles said. He later served in the Philippines and was stationed on the island of Okinawa, Japan, when US atomic bombs devastated Hiroshima and Nagasaki.

In 1962, Giles was among a small group of Broward County teachers who were the first African Americans to integrate Florida State College (now Florida State University). They were recipients of a National Science Foundation grant to study graduate-level math and science, inspiring the Tallahassee Democrat newspaper article titled, “Education, Not Agitation.”

In 2016, the Florida Legislature and Governor named the “Alphonso Giles Boat Ramp” at the Dr. Von D. Mizell – Eula Johnson State Park in his honor for using his boats to rescue Blacks who missed the ferry, leaving them stranded on Fort Lauderdale’s segregated “black beach,” which was not accessible by car. 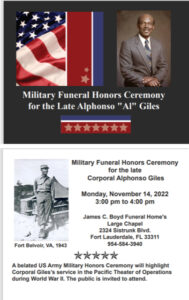 A certified boating navigator and member of the United States Power Squadron, Giles was the first African American member of Broward County’s Marine Advisory Board. Giles helped found the Jolly Anglers Boating Club for Fort Lauderdale’s Black boaters during the 1950s and took great pride in navigating his yacht, “Sea Hunter,” to the Bahamas.