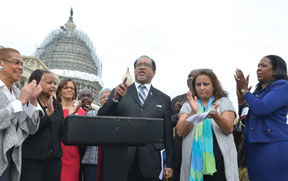 Black and Hispanic newspaper publishers have joined forces to investigate unfair advertising practices in the newspaper industry. In this photo, the NNPA President Benjamin Chavis speaks outside of the U.S. Capitol during a joint press conference between NNPA and NAHP in March 2016. Washington, D.C. Congresswoman Eleanor Holmes Norton (wearing the black and white print coat), Denise Rolark Barnes, the chair of the NNPA (wearing all black) and Martha Montoya, the president of the NAHP (far right), also delivered remarks.                       (Freddie Allen/AMG/NNPA)

A major anti-trust lawsuit has been filed by the owner of an independent marketing company, who says that, if he’s victorious, millions—if not billions—of dollars in pre-print advertising (inserts) could begin to flow freely to minority-owned publications that serve minority communities; publications that are often locked out of the market due to “forced buys.”

Further, the 15-page lawsuit filed in the District Court of Tarrant County, Texas, notes that Redan and its founder, Brent Murphy, believe that publications that serve the Hispanic, African-American and general markets may not be aware that they’re losing opportunities to compete for millions in advertising dollars, due to the actions of a few publishing conglomerates, who dominate the industry and might be colluding with some advertisers, while others are unaware of the controversy.

Murphy continued: “We believe national advertisers will be very interested to learn how ‘forced buys,’ fraudulent audit reports and industry collusion may have forced these national advertisers to spend millions over the last four years on pro-ducts that they could have obtained at a much lower rate.”

As much as $6.24 billion in revenue was generated by the local media industry from advertising inserts, also known as “circulars,” in 2014, according to the latest figures published by Borrell Associates, a research and consulting firm that tracks local advertising and helps media companies develop executive strategies.

The suit alleges that the Star-Telegram provided Redan with outdated media kits, which did not contain current and accurate audit results. The news-paper had misrepresented and mischaracterized the distribution of past products, the suit said.

Redan said it relied on accurate information when selling advertising in “En Casa” or “Mercado,” both Spanish-language publications.

Also, after promising not to convert En Casa from a Spa-nish-language publication to a bilingual one, the Star-Tele-gram did proceed with those plans, resulting in significant economic loss to Redan, includ-ing the ultimate shuttering of Mercado.

Further, Redan said it had a longstanding business relation-ship with the marketing and advertising company, Motivate, Inc.

Motivate, Inc., agreed to place multiple pre-print and run of paper advertising orders for its customers through Redan, but the Star-Telegram, in breach of its agreement to extend an exclusive rate structure to Redan for the sale of advertising in “En Casa,” offered significantly lower prices to Motivate, Inc. in order to persuade the company to place insert orders through the Star-Telegram.

The Star-Telegram did so despite the knowledge that Redan had an existing agreement with Motivate, Inc., which caused Redan to lose an entire year’s worth of insert orders and run of paper advertising in En Casa and Mercado, which contributed to the ultimate loss of Redan’s publication, Mercado, among other costs and expenses.

Further, the suit states that Redan and Valassis had an agreement that Valassis was to place multiple pre-print insert orders for En Casa and Mercado from 2015 through 2017.

In October 2015, Redan received insert orders from Valassis for placement of pre-print inserts in En Casa, orders which were filled, but went unpaid by Valassis, the lawsuit alleges.

Leaders at the National Association of Hispanic Publications (NAHP) and the National Newspaper Publishers Association (NNPA) said that they’re keeping a close watch on the court proceedings.

Leaders from both groups said that they believe insert advertising in the print industry may be skewed, due to forced circulation buys, which don’t put the advertiser’s best interest first and restrict the advertiser’s ability to work with media companies that specialize in the Hispanic and Black markets; that omission could also inhibit the buyer from choosing the best consultant and publication for a campaign, the leaders from the NNPA and NAHP said.

That practice, the organizations said, decreases the equal opportunity for all publishers to compete and those serving minority communities are mostly affected.

“Insert ads are very important because obviously, all publications, minority-owned and other companies, rely on this advertising to remain afloat,” said John Trainor, who runs the innovation and marketing company, Kreativa in Chicago, Ill.

Trainor is also the former CEO of Papel Media, a Hispanic advertising agency that also has history with Valassis.

“I’ve been involved in the insert industry for two decades and the problems that I saw 20 years ago, are similar to what we see today,” Trainor said. “Minority publications tend not to be home delivered and have a small subscription base and a lot of them are free, so advertisers, who have coupons of value are going to try and stay with publications that give them a little more control on inserts and the costs add up.”

Trainor said that today the goal is to win the digital age.

Still, the Redan lawsuit could potentially open a Pandora’s box that major publishers and some advertisers fear could leave them exposed to even more lawsuits from minority-owned publishing firms serving the Hispanic and African-American communities, according to court documents.

“The National Newspaper Publishers Association and the National Association of Hispanic Publications have established an ongoing strategic alliance to increase the advertising busi-ness opportunities for our member publishers across the nation,” said Benjamin F. Chavis, Jr., the president and CEO of the NNPA.

Chavis continued: “We are very interested in the Texas case concerning advertising inserts. We support all efforts to establish more economic equity and parity in the marketplace for Black and Hispanic publishers with specific reference to the billions of dollars annually spent on newspaper inserts.”