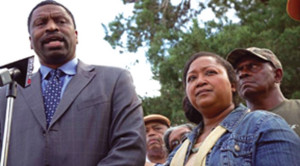 Mississippi: Call for investigation over ‘noose put on Black student’

Derrick Johnson, president of the Mississippi NAACP, talks to the media alongside Stacey (c) and Hollis Payton, parents of the alleged victim.

A civil rights group in the US state of Mississippi has demanded a federal hate crime investigation after the family of a black high school student said white students put a noose around his neck.

The alleged incident took place during a break in football practice, according to the National Association for the Advancement of Colored People (NAACP).

As many as four students are believed to have been involved in the case.

The parents say they have not been told if the school is taking action.

The alleged victim, a second-year student- football player at Stone High School in Wiggins, has not been identified. He has since returned to school and football practice.

Names and ages of the students accused have also not been released, but reports say they are all under 17.

In the 13 October incident, the noose was “yanked backward” while on the student’s neck as the group was in the locker room, Derrick Johnson, president of the Mississippi NAACP, said.

“No child should be walking down the hall or in a locker room and be accosted with a noose around their neck,” he told reporters.

“This is 2016, not 1916. This is America. This is a place where children should go to school and feel safe in their environment.”

The incident has echoes of Mississippi’s past when the lynching of Black people by whites was still a frequent occurrence.

The state has struggled with racial division and is the only one in the US that still incorporates the Confederate battle emblem on its state flag.

He added, in an interview with ESPN, that the student was not physically harmed but was “terrified” by the incident.

Mr. Johnson also said the parents were advised against filing a police report, because the father of one of the alleged assailants was a former law enforcement officer, the Associated Press reported.

But Capt. Ray Boggs of Stone County Sheriff’s Department disputed this, saying his advice was that pursuing criminal charges could result in hard feelings among students that could make the teenager’s life harder at school, AP added.

The school has not reacted.