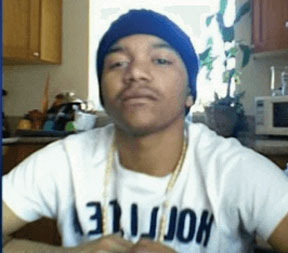 “Mommy don’t let me die” were the last words of Tavin Price, a mentally challenged young man,  was gunned down in front of his mother in Los Angeles.

Mourners gathered at a makeshift memorial to honor Tavin Price, who would’ve turned 20 on his birthday. They brought balloons and sang “Happy Birthday” to celebrate the life of a young man gone too soon.

Price was gunned down Fri-day morning outside of a car wash because he wore red shoes into a store, says Rivers.

“Some guys, he said, told him to take off his tennis shoes. He told him he wasn’t taking off his shoes, he wasn’t a gang-banger. He came back to the car and told me. I immediately put the nozzle down and told him let’s go because I didn’t want no problems,” Rivers re-called.

Rivers says before they could leave, the shooter rushed to-ward them.

“He ran up on my son and shot him in the back and then he shot him twice in the chest,” Rivers said.

A gunman wearing a light colored hoodie “approached the victim, shot him multiple times and then fled the location,” Det. Eric Crosson of the Criminal Gang Homicide Division told NBCLA 4.

“How vicious can you be to just kill someone’s son right in front of your face?” Rivers said.

“Just took my son’s life like that. I want that guy to be caught. Whoever it is, I want him to go to jail,” she said.

The gunman has not been apprehended.