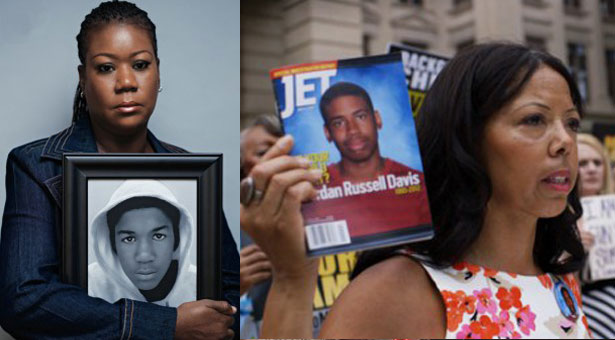 Today, Sybrina Fulton and Lucia McBath, the mothers of Trayvon Martin and Jordan Davis, are speaking out about Senator Bernie Sanders’ comments on guns and African Americans in Sunday’s Democratic primary debate.  During the debate, when asked about his racial blind spots, Sanders said white people “don’t know what it’s like to be living in a ghetto.” And on Monday, Sanders went further, saying, “When you talk about ghettos, traditionally what you’re talking about is African American communities.”

In addition, the NRA defended Sanders’ position that gun manufacturers should receive special immunity protections from lawsuits when their guns kill Americans.

“Senator Sanders is wrong to suggest that the concept of the ghetto is inextricably connected to Black America, just as he was wrong to yet again defend his NRA-backed position on guns,” responded Sybrina Fulton, mother of Trayvon Martin. “We need a president who understands Black families don’t all live in ghettos – and who has a plan to end the racial violence that too often plagues families like mine – not someone who says that ‘guns from Vermont are not the same thing as guns in Chicago’ because they are not ‘used for kids in gangs killing other kids or people shooting at police officers.’

Hillary Clinton is the only candidate who doesn’t reduce our community to a caricature, which is a key reason why she must be our next president.”

“Combating gun violence is a top priority for my family and countless families across this nation,” said Lucia McBath, mother of Jordan Davis. “That’s why it’s so disappointing to see the NRA defending Senator Sanders on guns. Families need to be able to hold gun manufacturers and dealers accountable when their weapons kill our children. We need a president who will fight for that – not someone who toes the NRA line.”