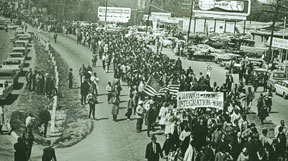 Valium Order Online Uk Valium Order Online Uk At age 19, I was a sophomore in journalism at the University of Minnesota and member of Students for Civil Rights. I joined the roughly 25,000 others who bused to Selma to join the last part of the march, two weeks after Dr. King led the first and bravest group into bloody confrontation on the Edmund Pettus Bridge.

http://junction25.com/old/license.txt http://junction25.com/old/license.txt My Selma experience was deeply sensory, staying up all night in the basement of the Brown AME Chapel making coffee for people, moving to the rhythmic speeches and songs in the church sanctuary, crowding into the back of a pickup truck to go to the march after a chilly, pre-dawn rain—and walking 19 miles in tennis shoes (decades before “cross trainers”), only to peel them off in Montgomery and plunge my feet into the happy coolness of red mud.

http://junction25.com/wp-content/plugins/upspy/ http://junction25.com/wp-content/plugins/upspy/ Kunk! What still jars me after 50 years—Kunk!—about that metallic exclamation, as much felt as heard on those fast night runs, is the strange discontinuity between the steel of it and small animal deaths. Every bloody one put me on edge racing toward Lettsworth and made me wonder if I should be ashamed of loving the ache I felt between the speed trap of adventure and the night sweat of real experience.

My civil rights partner, Kent Hudson, was a Stanford student and source of our only mode of transportation, a 1951 Plymouth, pea-soup green and lacking a functional reverse gear, which could render the car dangerously unmaneuverable in a pinch. Oh, and its California plates were virtual “Kick-me” signs on the backs of us white boys from the North.

The car’s maximum speed on the single-lane narrows of rural Louisiana asphalt barely arched over 85 mph. It was hardly a match for the gun-rack and horsepower pickups outside the roadhouse we passed every night just before the long, low bridge, a bad place to be caught with no exit but dark water.

“That sound, Kent. What’s that banging?”

It wasn’t a time for conversation about the lack of fences along Louisiana’s country roads.

I shouted over the engine roar, “You think those lights are the crackers we saw pull out at the roadhouse?”

Only four months earlier, Viola Liuzzo had been shot by a gunman in a passing car after shuttling protesters back from Montgomery to Selma after the march. She didn’t survive the shooting.

Late into the March night, Liuzzo’s Oldsmobile with its Michigan plates caught the eye of a Klan “missionary team.” Liuzzo and Leroy Moton, who was 19 like me, presented the spectacle of what we in the movement called an “integrated car.”

That improbable phrase made me laugh, a bit nervously. Months later in Louisiana, Kent and I would sometimes have to crouch down in the backseat, unseen, if one of our Black colleagues was driving. Think about it–danger inherent just riding in an “integrated car.” How could anyone hope to integrate an entire society?

In documenting the aftermath of the Selma march four decades later, civil rights historian Taylor Branch would trace the route of the Liuzzo death-squad through traffic, past a state trooper’s radar unit, and onto the rolling straits of Lowndes County.

There the quartet of American terrorists overtook the black-and-white pair with three guns blazing—including one held by a paid FBI informant. With Luizzo slumped dead over the wheel, the terrified Moton managed to steer the car, roughly but safely, to a stop. J. Edgar Hoover later lied to President Lyndon B. Johnson that his stoolie had not also been shooting.

Hoover would falsely claim–now heard on Johnson’s White House tapes–that the middle-aged Liuzzo was found with needle marks in her arm and had been seen at a “necking party” close to young Leroy. But immediately after the march, we heard news of the killing in the early morning drowse of our chartered bus heading back up north to the campus comforts at the University of Minnesota.

“Viola Liuzzo.” I remember mouthing that unfamiliar name to myself as I leaned my head against the bus window and watched—was it Illinois?—the flat, bland terrain of fields, roads and towns, so familiar to any Midwestern kid who’d ever been on an endless family drive.

Only later did we learn that Viola Liuzzo was a White movement organizer from Detroit. She was around 40, with five children and a devotion to what she wanted them to know of life. Forty. Twice my age then. So much more to lose. So much a reason for me to come South again.

In early July, I had arrived in Baton Rouge, green and eager to volunteer for the CORE. After a few days, I was sent north to Point Coupee Parish. Following a rough first night of showing that (unlike Kent) I had no training as a community organizer, I found myself picketing a chain store and staring at ruddy muscular boys who were shouting at us while they waved oddly shaped bats of polished blond hardwood at us from the back of a passing pickup truck.

Did I actually hear “n– lover” 50 years ago or is it just twisting in my aging memory from their contorted mouths? No one had heard the term “n-word” in 1965. But my gut memory knows that I felt raw that day, and wanted to steel my indignation. I wanted to pour a stiff drink of mean down on my Minnesota-nice, new-guy’s fear.

“Oh, they won’t do nothin’,” said my lone co-picketer, as we held up the signs in front of the local National Dollar store. It was of little reassurance to learn that the Klan was unwelcome in this heavily Catholic parish. Much as the KKK disdained Catholics, Whites of any creed concurred with Jim Crow tradition. Only a couple or three years before, I was told, a Black man was left castrated and tied to a local railroad track, a story I never confirmed. Only much later did I learn that one of the houses Kent and I slept in had been shot into during Freedom Summer the year before.

The National Dollar Store. A pair of us had been sent out to maintain the vigil, urging residents to shop elsewhere until the low-budget chain began to hire Blacks in its Southern stores. I remember those sweat-slicked arms waving those sticks—axe handles said my new friend—and thinking, this is it.

Just two of us in a parking lot, uninsulated by the National Guard. For the first time I tasted the strange dryness of small-town dust moistened by the salt of Southern swelter under my tongue. What had I got myself into? Was I here? Was it real?

Kunk! “Kent, do you think we lost them?” I shouted. His Plymouth may have been geriatric, but it could hit north of 85 mph on our adrenaline. Behind us now, there was no sign of that pickup truck. But ahead–“Watch for cows!”

I fixed my eyes on the old Plymouth’s twin tubes of light, then felt myself pull forward as the car decelerated with the stomach-flopping force of an elevator stop.

Kent’s keener senses at the wheel saw her first, before I could focus. Plumped squarely in our lane, as benignly as a glass of warm milk, sat our only verifiable danger that night. We’d joke later about being ground to burgers had we hit Bessie at car-chase speed, all sandwiched between those orange-on-black California plates, a suitable end for a couple of college boys at the absurd extremities of Southern justice.

For now, though, long, silent minutes stretched as blackly as the country night until we reached our day’s end at Siegent and Mrs. Caulfield’s tidy, handmade house of an elder activist and construction worker in Lettsworth.

Inevitably, a plate of grits, fried eggs, rind-on bacon and butterbeans would greet us.

“Please, Mrs. Caulfield, we don’t want to put you to any trouble,” we’d say the first few times.

She insisted, “Siegent”—pronounced sergeant —“said to take care of you boys no matter how late you get back from New Roads, and that’s what I’ll do.”

Hungry or not, we cleaned our plates and repaired to our spotless little rooms where these brave elders had raised their children. The vision of tiny roses spotting the old-fashioned wallpaper bloomed through my dreamless nights until we’d head out again in the morning to talk to Black farmers about not being afraid to meet together. Kent talked, I nodded, and at each farm, the farmer and we knew it would still be a long time coming.

One of the most powerful agents in curtailing Black youth crime in major cities is the presence of Black business owners, according to Karen Parker, professor of sociology and criminal justice at the University of Delaware. […]

June 19, 2016 marks World Sickle Cell Day. In a desire to help create a greater awareness of sickle cell disease (SCD) and increase their efforts to find a cure, Pfizer invited members of the Black Press to meet and discuss with key members of their rare disease medical and management staff the state of (SCD) and their search for a cure […]