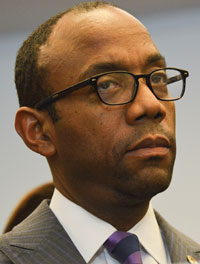 Why did the NAACP’s national board vote to part ways with their president, Cornell William Brooks? Several longtime members contacted by the NNPA Newswire were shocked to hear the news. Brooks, 56, has served in the position since May 2014. Some NAACP insiders said that there was a lack of communication between the NAACP’s large board of directors and Brooks. Others say that a lack of fundraising prowess was the reason.

On the day the board voted to end Brooks’ tenure as president (his current contract expires on June 30), NAACP Board Chairman Leon Russell announced that the 108-year-old organization is “retooling” and embarking on “an organization-wide refresh” in response to the “audacious challenges” in “today’s volatile political, media and social climates.”

During an interview with American Urban Radio Networks, Brooks was asked why he was being let go. He responded: “I can’t point to any substantive reason. What I can point to is this: the NAACP over the course of less than three years, is more visible, more vocal, growing in members, donors, presence in the courts and in communities across the country.”

Brooks continued: “We’ve had nine court victories against voter suppression in ten months. We not only demonstrated in Flint, we filed suit in Flint…online membership is up 87 percent and online paper membership is up seven percent. Online donations are up 800 percent,” Brooks added. On May 21, Brooks was bombarded on Twitter with positive praise from wellwishers for his three years as NAACP President.

Brooks was also instrumental in spotlighting the damage President Donald Trump’s Attorney General Jeff Sessions will likely do to voting rights with a demonstration in Alabama that resulted in Brooks’ highly publicized arrest.

During a May 19 media call on the end of Brooks’ presidency, NAACP National Board Chairman Leon Russell and Vice Chair Derrick Johnson told reporters that the search for a new leader will start immediately and focus on, “renewed nimbleness and vigilance so that we can aggressively respond to the current climate of political unrest as well as the assault on human rights.”

Russell also added that, “we don’t have a job description in front of us.”

Russell said that there would be a, “system-wide and strategic revisiting of processes…that will ensure the NAACP can address these 21st century challenges.”

Russell also said that he and Johnson would manage the day-today NAACP operations on an interim basis until a replacement for Brooks is found. They also announced a NAACP “listening tour” in an effort to be informed “by the people we serve” and to “harness grassroots energy” while at the same time listening also to current staff, past leaders in the Civil Rights Movement and “philanthropic” groups.

The NAACP makes this startling leadership change at an incredibly crucial time. President Donald Trump is reeling amidst accusations of collusion with the Russian government, during the 2016 election season and obstruction of justice involving former FBI Director Jim Comey’s investigation of it. Attorney General Sessions easily represents one of the biggest threats to policy issues disproportionately impacting African Americans.

But the NAACP has clearly taken a back seat in terms of national attention. Younger, tighter and more focused movements such as Black Lives Matter, Color of Change and now The Indivisible Movement have leveraged social media and narrowed priorities to push there agendas as the NAACP has remained in a traditionalist managerial model that would appear illsuited for the times.

The vote by the 64member NAACP national board to part ways with Brooks took place during a quarterly board meeting in Florida and on the same day that Dr. Rev. William Barber stepped down as NAACP North Carolina State President.  Barber has led the Moral Mondays movement in North Carolina and won political and public relations attention as a result.  He is now focused on a diverse “poor people’s campaign” modeled after Dr. Martin Luther King’s own work.

The former manager of Donald Trump’s presidential campaign, Paul Manafort, is to face charges related to an inquiry into alleged Russian election meddling, US media report. He was seen arriving at an FBI office in […]

Should the Democrats trust the snake because he spoke?

Should the Democrats trust the snake because he spoke?

Thug’ is in the eye of the beholder