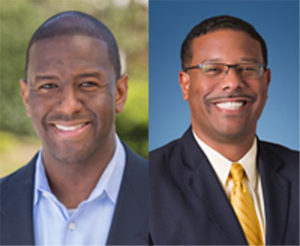 On June 9, 2018, in Orlando, Fla., at The Rosen Centre, members of the Florida NAACP focused their attention on back-to-back discussions from two African American candidates, Mayor Andrew Gillum and Representative Sean Shaw as each layed out their respective platforms and answered questions from the audience. This was an historic occasion because this is the first time in the history of the state of Florida where a Black man is running for the highest position of governor.

This is not the first time that a Black man has run for the position of Attorney General, but to have two Black men running for the two highest positions in the state is both unprecedented, and powerful. The optics of two Black men changing the political landscape in Florida is exciting, yet extremely challenging.

The NAACP was founded February 12, 1909, and is the nation’s oldest and largest African American organization with more than 500,000 members and supporters throughout the United States. It is recognized as the premiere advocate for civil rights in the Black community, leading grassroots campaigns for equal opportunity and conducting voter mobilization.

“As a child of the NAACP, someone who has grown up around the organization, I credit so much of my leadership skills to them. Every candidate running for governor must interface with the NAACP because their role in society is so significant it cannot be diminished or reduced” says Mayor Gillum at the Florida NAACP Summer Quarterly Meeting.

This event was a phenomenal program where Mayor Gillum called it “Truth Telling.” Representative Sean Shaw has always worked to protect consumers of Florida as a Florida insurance consumer advocate. Representative Shaw has identified his role as the next Attorney General in the state as an “independent watchdog” for the people of Florida.

Representative Sean Shaw is an advocate for reforming the criminal justice system. At the meeting, he indicated the he has raised over a million dollars for his campaign, and he is leading in the polls for the Florida Democratic Party nominee.

”A lot of our resources are spent dealing with arresting and detaining individuals who are in there for drug possession, and I think we need to reform not only how we deal with the legalization of marijuana, but our sentencing reform holistically,” says Shaw.

The Democratic primary in 2018 for governor is wide open, and no one has a commanding lead in the polls. During Mayor Gillum’s speech, he indicated that he was the most qualified for the position, and that 32% of voters registered in the state of Florida are African Americans.

Both races are extremely significant because both candidates have the opportunity to win the primary in the office they are running for. Convincing the African American community to vote in the mid-term election will be hard work, but both men are up to the task.

At this time in the primary, both candidates must improve their name recognition, and expand the electorate by building a coalition of African Americans, Latinos, Asian Americans, all people of color, millenmials, seniors, and progressive Whites.

Gillum can win the primary because the other three candidates for governor are fighting for the same traditional base of the Democratic Party. Gillum must be focused on a bold vision grounded on a new winning coalition that is built on the Florida of today, with Black women leading the way.

“We’ll raise what we need to raise to be competitive” Shaw said adding he will raise more than $4 million. He’s expected to have the support of Orlando’s personal injury lawyer, John Morgan who possesses the personal wealth and political contacts to raise a lot of money.