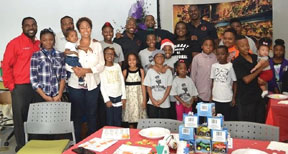 Vice Mayor Maxwell B. Chambers, his Legislative Aid, Maureen Kohler, Nazhi Thee Baker, along with her mother Nashanta Forrest set off the holidays for children who are battling Sickle Cell Anemia on Saturday, Dec. 17, 2017 at Miramar Police Department Headquarters in the Comm-unity Room. The event was to raise awareness for Sickle Cell Anemia and to give care bags to kids with sickle cell for children from Joe DiMaggio Hospital.

Nazhi Thee Baker, Angel Foundation, Inc., is an organization which offers “a little slice of heaven without getting sick.” Rinezhanae Forrest “Nazhi” is an 11-year-old girl battling Sickle Cell Anemia. She stated that she got this idea for her foundation in 2014, when her older sister, who was 14-years-old at the time, got a stroke from the disease. She stated that at that time she found out that “kids are committing suicide because of their unhealthy diets.” She said that while seeking treatment for her sister they met a holistic doctor who informed her and her family that pain from sickle cells are being exacerbated by unhealthy eating habits. Because of this, and her love for sweets, she decided to make healthy cakes and share the knowledge of what she has learned with other sickle cell children. Thankfully, her sister pulled through that trying time.

Her mother Nashanta Forrest conveyed that both she and her husband have the sickle cell trait.   Partly for this reason and other biological reasons all three of her girls received the sickle cell trait.  She expressed, “sickle cell is a beast.” She stated that when the kids were growing up they all would end up in the hospital at some point and time. She stated that there was not an agency out there to help them with the financial needs nor were they properly educated about the disease.  Therefore, when her daughter Nazhi wanted to start the organization, she thought it to be a good idea.

Mrs. Forrest stated that they would help educate others about the disease and give back to the community.  She said that she does have a son, Dearmani, who is 19-years-old but he did not get trait. When her daughter Shakaria, who is currently 17- years-old, had the full-blown disease, suffered a stroke when she was 14 years old, she knew she had to do something after that to prevent losing her daughters. Gratefully around that time, she met Dr. Charlie Ware, a holistic doctor who educated her about the “trigger foods” which can cause inflammation, and a cascade of events, including a massive stroke in people with Sickle Cell Anemia.

She also said that since they have changed their eating habits, the girls have not experienced chronic pain in three years.  She credits Dr. Ware’s secretary who helped guide Nazhi, telling her different things she can make using healthy ingredients. Therefore she started baking the cakes, running with the idea. All the proceeds she receives from selling her cakes are donated to the community.

When asked how she came to partner with Vice Mayor Chambers, she stated that she was introduced to him when she called the Mayor’s office looking for help. She was referred to the Vice Mayor’s office and he has been a great help to her since then. She relayed “he is a servant to the community. I cannot thank him enough.”  The Vice Mayor relayed, “I’m blessed to be a part of my community.  I’m proud to be of service in my community…   love, love is the key.”

That’s true Vice Mayor: if most people loved more and gave themselves to serve more in their community we would not have all this violence in our communities. This holiday season put a little love in your heart, not just for the season but make a vow for always, it certainly will not hurt your community but help it.

On Jan. 8, 2018 The Delta Eta Zeta Chapter of Zeta Phi Beta Sorority, Inc. held a health seminar for the public called “Get Fit and Stay Fit”. The seminar took place at the African American Research Library and Culture Center in Fort Lauderdale, Fla. […]

Sisters on the Move!