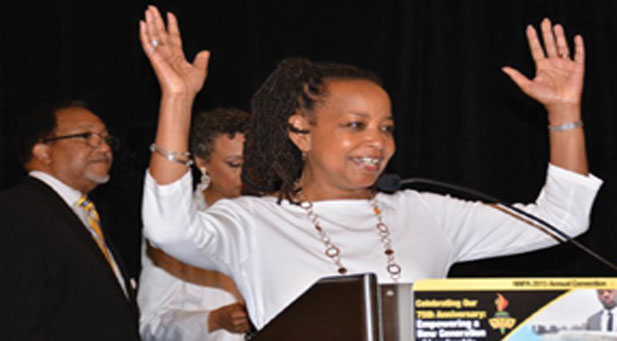 TriceEdneyWire.com – When America’s first Black newspaper was published on March 16, 1827, Black people were still enslaved. Nearly two centuries later, the issues of Black America – though not as severe as human bondage – are still urgent and continue to undermine America’s promise of freedom and justice for all.

This is the reason that 21st century Black newspapers remain focused on “pleading our own cause” as was expressed in the first editorial by abolitionists Samuel Cornish and John B. Russwurm in the Freedom’s Journal. The editorial concluded, “Too long has the public been deceived by misrepresentations, in things which concern us dearly.”

In this regard, Denise Rolark Barnes, the new chair of the National Newspaper Publishers Association, says the federation of more than 200 Black-owned newspapers will continue to not only thrive but grow as it begins its 75th year. With most newspapers in an economic struggle industry wide and Black newspapers enthralled in a historic battle against advertising discrimination, Barnes says NNPA’s new leadership team will encourage a keen focus on issues that continually plague Black communities, while initiating strategies to expand.

“Housing, the large foreclosure rate, the issue of the lack of police-community relations, the unwarranted deaths of young Black men at the hands of police, the big issue of Black on Black crime, we need to take responsible positions on all of these issues because this is what our community looks for, but this is also what I think our advertisers will be looking for.”

“”They want us to take a stand on these issues,” says Barnes in an interview with the Trice Edney News Wire. “I’d just say look out because we’re going to flex our muscles. And we’re looking forward to doing our jobs on a broader scale and speaking stronger. And I know the publishers are prime for it.”

The flexed muscle of the Black Press recalls the powerful logo made famous by the historic Richmond Planet. The newspaper’s banner carried a drawing of “a flexed, muscular Black arm with lightning bolts radiating out of its clenched fist”, as described by the National Endowment for the Humanities.

Barnes, publisher of the Washington Informer Newspaper for more than 20 years, was given the leadership charge by her fellow publishers in a June 19 election held during the NNPA Annual Convention in Detroit. As publisher, she follows in the footsteps of her father, the late Calvin Rolark, who was widely known as a business and community leader as well as publisher of the Informer, which he founded more than 50 years ago.

“Many of us are second generation publishers. We’re fairly young and are committed to the legacy that was left by those who started in this industry. We understand what our responsibilities are and we’re looking forward to continuing to make a difference through the stories, the photographs, and the editorials that you’ll find in Black-owned newspapers,” said Barnes.

She ticked off several initiatives foremost on her mind that the association must explore in coming months and years in order to expand and strengthen its membership. Among them are:

* Since NNPA operates off of sponsorships and advertising, there must be new ways to help corporations understand the value of Black newspapers. That will be a major effort now through a national advertising sales team currently being established.

* Increase, solidify and grow online presence in order to engage readers who may not readily pick up newspapers. Currently, the two NNPA websites are NNPA.org and BlackPressUSA.com. Most NNPA member newspapers also have their own individual websites. The NNPA Foundation, which includes the D.C.-based NNPA News Service and Blackpressusa.com, run by Editor-in-chief George Curry, has a separate board.

* Create genres through which readers can exchange opinions and thoughts surrounding the issues and articles in Black newspapers.

* Consider broadening the NNPA membership base to fully include those newspapers that only publish online as well as helping to bring back members that may have become defunct due to economic difficulties.

* Provide greater support and service to newspapers that are evolving into multi-media companies.

* Support the staff of the national office, also based in Washington, D.C., in order to maximize the success of the policies set by the board.

Barnes’ term as chair is two years, after which she could run for a second two-year term. The executive committee heads a 22-member board of directors, including representatives of five regions. The board establishes policy and directives for the Washington, D.C. headquarters, which is led by NNPA President/CEO Benjamin Chavis.

Chavis’ stature as a former member of the recently pardoned historic Wilmington 10 as well as his civil rights leadership as former NAACP executive director has raised the visibility of the organization to a new level over the past several years. Barnes, who replaces former chair Cloves Campbell of the Arizona Informant, says she will build on the new growth forged by Campbell during his four-year tenure.

“NNPA for so long didn’t have a president and didn’t have a staff; therefore the publishers were actually involved in the day to day management of the association. Now, we have the benefit of both of those, the president, the staff and the National Office. And so, the board now can get back into the business of creating policy,” she said.

The fact that the NNPA national office and chair are now both located in the nation’s capital is an additional advantage from a standpoint of infrastructure, she said. Amidst the home of the federal government, the U. S. Congress, she says she will work the relationships garnered by her and her father over 50 years for the maximum benefits for NNPA.

“We serve as the voice for the Black community; we speak truth to power, we influence legislation and I think when folks see that we’re still an integral part of our community because of the positions that we take on behalf of our community, it will show that we have the kind of value that’s worth investing in,” Barnes says. “Some may not always appreciate the positions that we may take. But, it’s not about liking what we do. It’s being respected for what we do.”

She concluded, “We give you stories about communities that are working hard to support their families, to build communities, to contribute to this nation and to the world and I don’t ever see a day – to be honest with you – where the Black press will not play that critical role in this country and across the world.”

According to Stockton Williams, executive director of the National Council of State Housing Agencies (NCSHA), in 2017 alone, state HFAs provided $28 billion to finance affordable homeownership for more than 152,000 households, 26 percent of which were minority-headed households. […]