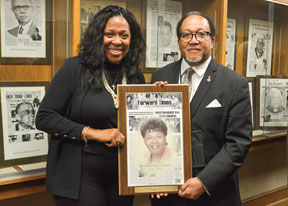 Order Alprazolam Online India Karen Carter-Richards, the publisher of the “Houston Forward Times” and Benjamin F. Chavis, Jr., president and CEO of the NNPA, hold a plaque dedicated to Lenora “Doll” Carter and her contributions to the Black Press. The plaque will be added to the NNPA’s Gallery of Distinguished Newspaper Publishers at Howard University in Washington, D.C. (Freddie Allen/AMG/NNPA)

Order Alprazolam Online Cod Chelsea Lenora White, one of Carter’s granddaughters, delivered a stirring solo performance that included an emotional rendition of the classic “Reach Out and Touch (Somebody’s Hand)” by Diana Ross.

Leavell reminisced about how Carter worked tirelessly keeping the books for the NNPA while at times putting the Black Press trade group ahead of her beloved Forward Times. “In that day, it was twice as hard for women and Doll Carter stood the test of time.”

Cheap Alprazolam From India Jackie Hampton, the publisher of the “Mississippi Link” said she was simply proud to have known Carter.

http://tamaralounge.com/gallery/feed/ “I’m thankful that I got to know her in a very special way,” Hampton said.

http://bisnisbajumu.com/tag/bisnis-baju-grosir Many who attended the ceremony called it the most touching they’ve witnessed.

The Gallery of Distinguished Newspaper Publishers and the Black Press Archives have been housed at Howard University’s Moorland-Spingarn Research Center since 1973.

http://artists-atelier.com/wp-cron.php?doing_wp_cron=1580936344.1950120925903320312500 A touching video tribute, that featured colleagues, workmates and family members recalling Carter’s love for community and her newspaper, was one of the many highlights of Carter’s enshrinement ceremony.

“We hold the NNPA near and dear just like my mom did,” said a tearful Karen Carter-Richards, Carter’s daughter. Carter-Richards’ daughters and her son stood by her side. Carter-Richards accepted the enshrinement plaque, bestowed by NNPA Foundation Chair Al McFarland, NNPA Chair Denise Rolark Barnes and NNPA President Dr. Benjamin F. Chavis, Jr.

Xanax 1Mg Buy Online “Lenora Doll Carter was high-class,” Rolark-Barnes said. “But, she knew how to deal with regular people.”

Following the formal ceremony, the drummers led the family members and visitors to the Black Press Archives; visitors to the archives can find a comprehensive research resource that includes complete microfilm files of Black newspapers and records of Black editors, publishers and journalists.

Can I Buy Generic Xanax Online The archives represent a vital and constructive element of the Moorland-Spingarn program charged with the collection, preservation and interpretation of Black history and culture.

Texas Democratic Rep. Sheila Jackson Lee offered words of appreciation for Carter’s contributions to the Black Press and her community.

“We’ve been under siege in Washington. The nation is under siege, but I wanted to step forward in this historic place to give honor where honor is due,” Jackson Lee said. “Even surviving and living and being the predominate news for our community…it’s obvious that Doll Carter made that her life with [her husband] Julius.”

Jackson Lee talked passionately about how Carter lifted the spirit of others and demanded respect for all.

“She walked with kings and queens,” said Jackson Lee. “But she still was able to walk around Houston and made sure that no one looked at her differently.”

Becoming Black Governors is harder than they think but perhaps Abrams and Gillum can make it happen via “Two the Hard Way”! […]