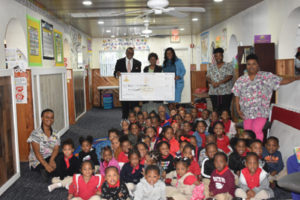 As part of the first phase of an established marketing plan for the National Newspaper Publishers Association (NNPA), the leadership of the storied organization announced the launch of their inaugural “NNPA Community Impact” initiative to kick-off the 80th Anniversary of the NNPA.

This initiative was championed by NNPA Chair Karen Carter Richards, who believes the NNPA should regularly highlight organizations that are making an impact, or people who are making a difference, in their respective communities, but rarely get the recognition they truly deserve.

“We must leave a footprint in all of the communities where we have a presence and where we are making an impact,” stated NNPA Chair Karen Carter Richards. “As we visit different cities, we must connect with the communities we serve and leave a lasting impression. In doing this initiative, we must also highlight the newspaper(s) in those respective cities to make sure they’re included in the effort. We must work collaboratively together and make every community remember that the NNPA was on the scene and should never be forgotten.”

Just this past week, at the start of the 2020 NNPA Mid-Winter Conference that was held in Fort Lauderdale, Florida, the NNPA put this initiative into action as they worked alongside local publisher Bobby Henry of The Westside Gazette to honor The Red School House as the “NNPA Community Impact” inaugural recipient.

“The Red School House has served the Fort Lauderdale community for more than 52 years and has taught and developed many upstanding African Americans who have moved on to make their own impact in various communities around the nation,” said Bobby Henry, Publisher of the Westside Gazette. “I was honored to work with the NNPA to select The Red School House as the ‘NNPA Community Impact’ inaugural recipient in my city.”

The NNPA and The Westside Gazette saluted The Red School House by presenting them with a check for $500, as well as hosted a pizza party for the kids.

From vision to planning to becoming a reality in 1968, The Red School House has provided a safe, caring and learning environment for children whose parents were working, and has become a staple in the community for over 50 years.

Mrs. Julia was employed as a bus driver for the School Board of Broward County and was married to her husband, Mr. Harvey Shaw, who was employed as a Longshoreman for Port Everglades. The couple had 5 children and because everyone in her family found themselves working, Mrs. Julia recognized that there was no one at home to raise the children in the family.

After recognizing this dilemma, and to ensure the family’s children were properly cared for, Mrs. Julia declared “someone has to stay here and keep these kids.”

That is when and how The Red School House was birthed. It was the old-fashioned tradition of including the home, church and community that became the catalyst behind Mrs. Julia using her home as a primary place to start caring for her family’s children.

That house now stands as a legacy for the family and for the community.

After the untimely death of an aunt who worked at the school, in 1983, Mrs. Julia asked her daughter, Ms. Gwendolyn Shaw, to come home in 1984 to take over operations.

At the time of her mother’s request, Gwendolyn was living in Chicago and was working at Jet Magazine and at Motorola Corporation. Because her mother wanted her to become the Director of The Red School House, Gwendolyn made the decision to move back home and honor her mother’s request. In 1986, they were able to renovate the school, which had previously operated out of two buildings. They consolidated the school into one building without ever closing their doors. In 1993, the playgrounds at the school were reconstructed to make them safer for the children and all of the teachers became CDA certified.

Mrs. Julia passed away in 1998, leaving Gwendolyn with the sole responsibility of running the business. As part of their regular school routine, every morning they start the day with devotion, with all children and staff front and center. Gwendolyn comes forth and sets the atmosphere for the day and afterwards, the students return to their classroom setting.

Outdoor play is part of their daily schedule (twice a day) and gymnastics (physical education) is every Friday at the community L.A. Lee YMCA.

The students also attend field trips to all Disney on Ice productions, circus performances, Sesame Street performances and any cultural and fine arts performances that will enhance their exposure to appreciate the world of fine arts, entertainment and community activities. Twice a year, the performing arts skills of the students (ages 2 thru 5) are displayed at their annual Christmas program in December and at the Graduation performance held in May.

The Red School House students are picked up by limousine service and taken to the Cheesecake Factory in downtown Fort Lauderdale where they dine for lunch and are taught how to model good behavior and manners.

The Red School House has been in business for 52 years and has never received any federal funding, primarily because they didn’t want to change their curriculum.

“We are still as strong today as we were on that September day in 1968,” Gwendolyn states. “Our purpose has become our passion, to make a difference in our community, to care for children in providing a safe and nurturing environment, to provide educational excellence for each child. We are a traditional school with traditional values and a whole lot of love.”

This is a monumental initiative for the NNPA and is consistent with its overall mission and vision. Since its founding exactly 80 years ago, the NNPA has consistently been the voice of the Black community and an incubator for the news that makes history and impacts the country today and tomorrow.

From delivering news, information and commentary to be the largest and most influential Black-owned media resource in America to reach local markets with African American consumers. From helping to shape ideas and opinion to shaping thinking. From thought leadership to leading change. Each week 20 million Americans from all backgrounds seeking news from the Black perspective turn to NNPA newspapers.

This initiative will expand the impact and reach of the Black Press across America and in local markets to ensure the mission and vision of the NNPA remains relevant.